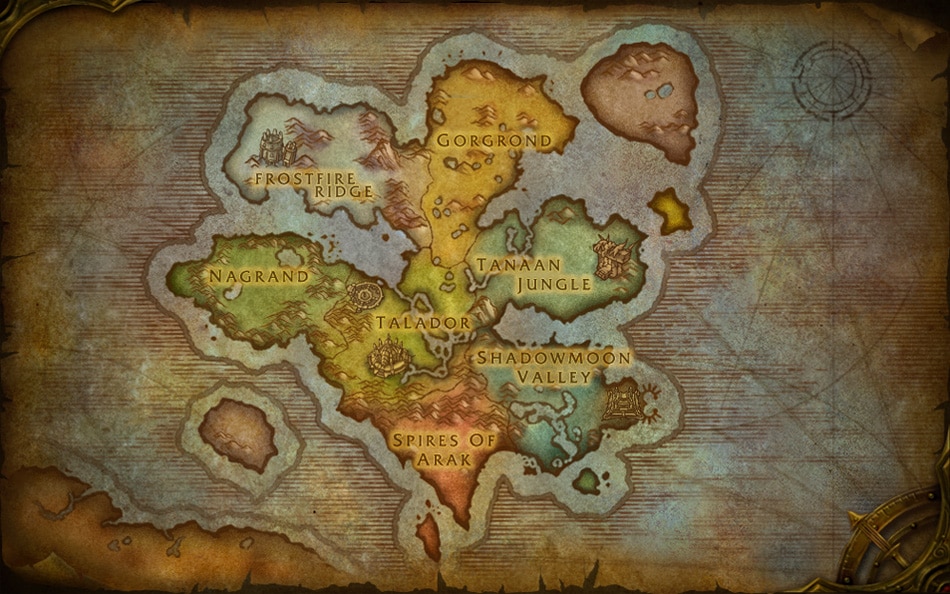 What you’re looking at is Draenor as it was before it became Outland and the Warlords who ruled it. In case you need a reminder, Draenor is the Orcs’ homeworld.

I’m by no means an expert on Warcraft Lore but I do know quite a bit. Here’s the plot for Warlords of Draenor (henceforth WoD) in a nutshell:

After the events of Mists of Pandaria, Garrosh Hellscream was removed from power as Warchief of the Horde and put on trial for the atrocities he committed. With the help of a third party (we don’t know who yet) Garrosh escapes custody before the verdict can be read. With that help of that person Garrosh goes back in time to Draenor as it was 30 years earlier. Back before the events of The Burning Crusade, back before Medivh opened the Dark Portal, introducing the Orcs to Azeroth. Before the Orcs drank the blood of Mannoroth and became corrupted.

For those who don”t know, uncorrupted Orcs are Brown. The Green-skinned ones were born from the orcs who corrupted themselves with fel magic. In comparison, Blood Elves have green eyes becaue they were exposed to Fel Energy whereas originally, they had Blue Eyes. Anyway. Garrosh went back in time and convinced the Orcs to not drink Mannoroth’s blood. He then united six of the seven Orc Clans of Draenor under his father Grommash to create the Iron Horde. Infused with technology from the present, the Iron Horde looks to open the Dark Portal and wash over present-day Azeroth like  a wave upon the sand.

Let me back up and explain how this works in regards to time travel (which Blizzard insists this isn’t): The Draenor you go to is not Outland (repeat as needed). The Draenor you visit entertains a “What if the Orcs were never corrupted?” scenario. In WoD we find out the answer to that. Even back then the Orcs were savage but they were not without a sense of honor. It was what attracted the Draenei to Draenor, after all. Before they were corrupted the Draenei and the Orcs shared their world. Even without Fel Energy, with the knowledge provided by Garrosh the Iron Horde controls most of Draenor. This Draenor is from a Parellel Universe. It doesn’t effect Azeroth’s past but if the Iron Horde is not stopped on Draenor, it can effect its future.

Past, Present and possibly future collide in Warlords of Draenor.

Of the seven Warlords, five of them (technically only four of them are chieftains) join forces with Grommash Hellscream:

The only one who doesn’t join the Iron Horde is Durotan (who Durotar is named for), leader of the Frostwolf Clan and father of Thrall. If Ner’Zul and Gul’dan’s names sound famillar they should: After the Orcs were first introduced to Azeroth Ner’zul became the first Lich King. Gul’dan was a powerful Warlock in life and in death. During the events of Warcraft III: The Frozen Throne, Illidan infiltrates Gul’dan’s tomb and takes his skull. The very act grants him the demonic visage he’s known for today.

Getting back to Durotan, the Frostwolf Clan joins the Horde for survival against the Iron Horde. As for the Alliance, let me present to you Karabor as it is now:

Now known as the Black Temple, Karabor was the last bastion of Light in Draenor before it fell to the Fel Orcs and was corrupted. During the events of Warcraft III: The Frozen Throne Illidan Stormrage claims it for himself. During the events of The Burning Crusade, The Lord of Outland is slain and Karabor’s former High Priest Akama vows to restore it to as it once looked:

Yes, you’re looking at the same building. If any of you have yet to enter the Black Temple raid, here’s the trailer:

That videp sums up the radical change quite nicely. In WoD you will visit Karabor uncorrupted. You will also meet the only Faction Leader of Draenor who is still alive today: The Prophet Velen. A 30 years younger Velen (which is nothing compared to his being over 12,000 years old!) who struggles to keep the Iron Horde from taking Karabor. The question on the minds of many: What will happen when past as present Velen meet? One thing Blizzard promises to deliver with WoD is we will learn how the Draenei lived on Draenor before it became Outland. Considering Blizzard famously retconned the Lore to make Draenei a playable race in TBC and created the Pandaren Lore from scratch in Mists of Pandaria, anything’s possible.

The thing about WoD that has me excited the most is the introduction of the Garrison:

Click the link for details on it but yeah. I’m coming back to WoW just for that. The single most requested feature is finally coming to WoW: Player Housing. I hope two things: First, you will eventually be able to build Garrisons on Azeroth (Kalimdor, Eastern Kingdoms, Northrend and Outland). Second, you will be able to bring other characters you created on the same server into the game to help in some way.

The other big thing that is also generating some controversy is the Boost to 90 feature. Those who upgrade to WoD will be able to instantly power level a character of their choosing to level 90 (with level-appropriate gear after being leveled up). The process is instant and the boosted char can be played with immediately. Why the controversy? There is a fear Blizzard will make it a paid service later on. I would welcome that personally since Blizzard made the leveling experience on Pandaria so unfriendly to alts. In comparison, I had 6 level 85 characters by the end of Cataclysm.