Microsoft: “The Age of Single-Purpose Consoles is Over.”

Xbox Director of Product Planning Albert Penello said so during a panel at CES 2014 in Los Vegas yesterday. I was reading an excerpt of what he was talking about on Gamespot and checked out the source article.

The era that started it all: PONG.

All the Nintendo Consoles: NES, SNES, N64, Gamecube, Wii and Wii U.

The first four are Single-Purpose systems. They were designed to do ONE thing: Play Video Games. Let’s mosey over to Nintendo’s handheld department now:

What you see is the reason Nintendo has dominated the handheld market for 25 years now. I owned a Game Gear, Wonderswan Color and as you know, I own all the PSP Generations plus a Vita. I can say that. As an aside, my first handheld was in fact the Game Gear in 1993. I got my Game Boy Color 5 years later and have owned every Nintendo handheld made since then, usually two due to Pokemon. Of that list I have a Game Boy Advance SP, a DS Lite and two 3DS (not XL) systems.  I’m sure you’ve seen the pictures and if not, you’ll see video soon ^_^

Anyway, of that list all except the last five (I’m including the 2DS in the five even though it’s not pictured) from Game Boy Classic to DS Lite is a Single-Purpose system–you only play video games on them. Nintendo experimented with releasing select Pokemon Episodes on the Game Boy Advance but it never really took off and hasn’t been revisited though the animated Tekken movie is included with Tekken Revelation on the Nintendo 3DS.

Now we’re going to talk about what a Multi-Purpose system is. Again, the pictures:

The New Current Gen Consoles: Wii U, Xbox One and PS4. 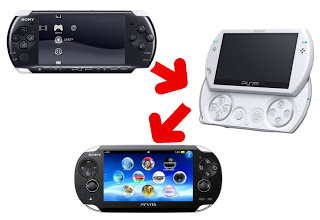 The PSP, PSP Go and PS Vita. As an aside, I have All three.

Of course, the PS1 and PS2 are Mutli-Purpose Consoles, too. What IS a Multipurpose console? Simple: A Console that does more than just play video games. For those who haven’t owned a console or handheld made in at least the last 14 years, this blog post is for you. Before I continue, I forgot to mention backwards compatability. I’ll give you the rundown on a few consoles that support this at the end of this already lengthy blog post ^_^

Now, getting back to the multi-purpose aspect. The PSP was the first handheld to do this. In addition to playing PSP UMD Games you could also play UMD movies (I still have quite a few myself), video files, music and view pictures (computer and USB cable needed for the last three). It’s great uncle the PSOne has two functions: Play video games and play music CDs. If you had Ridge Racer you could actually do BOTH at the same time. The PS2 and Xbox 360 can play DVDs. The 360 could not only play Music CDs but you could rip CDs (including burned ones) to the 360’s hard drive. The PS3, Xbox One and PS4 can all play Blue Ray DVDs (as well as regular DVDs and Music CDs).

That’s just scratching the surface. Here’s the rundown on some of the more interesting features the current and last gen consoles and handhelds have to offer:

The rest would be more fun to discover on your own. For those who just want to play video games, you can certainly do only that on all of the above consoles. Even so, it certainly doesn’t hurt to be able to do many of the other things I outlined in this blog post. Like it or not, Mutli-Purpose consoles are here to stay.