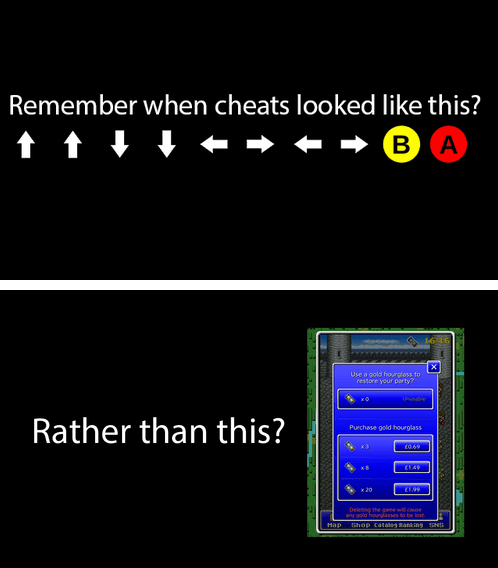 Let’s be honest: DLC in video games have been around since the 1990s. It wasn’t until about 10 years ago the practice of paying real money for virtual goods or services made its way into console gaming. Out of all the things the gaming communities argues about internet websites worldwide, there is a consensus in the strong belief Micro Transactions are the industry’s way of milking its consumers for every dime they have.

While it’s far more obvious in Moble Games, Apps and Free to Play MMOs (I’ll revisit Free to Play MMOs in a separate blog post by the way) it’s made its presence known in the console and handheld (not Moble) market. Let me be transparent before I continue: When I wrote my reviews for Fire Emblem Awakening and Shin Megami Tensei IV last year I was adamant about the DLC Content in both 3DS games. As I pointed out when I got my Red 3DS a few months back, I got all of the DLC content for Fire Emblem Awakening a second time. $56 x 2 = $112, which is almost four times the cost of just one copy of the game itself ($40). The DLC content in Fire Emblem Awakening is a mixed bag of game-breaking EXP and Gold Making Maps, Additional Skills (Limit Breaker, All Stats +2, etc.), Two additional Classes (Dread Fighter and Bride) and the most difficult map ever thought of in Fire Emblem history (Apotheosis).

Before I continue, by definition a Micro Transaction is paying for virtual goods and services in a video game weather it’s from within the game itself, a website, or the console. Virtual Goods could be cosmetic items such as an EXP/Gold Boost or a decal for your console’s Avatar or main menu. The general consensus among most gamers is this is the most folks are willing to tolerate in terms of acceptible microtransactions.

Starting with the last gen (though for far longer on PC games) there’s been a massive influx of games with DLC-exclusive content. Not the cosmetic stuff I mentioned above but extra content most gamers feel they shouldn’t have to pay real money for. One such item is the Season Pass but that in itself will get its own blog post. It’s funny how with PC games other than WoW and Star Wars The Old Republic (both are MMOs by the way) most folks don’t have a problem buying DLC content. The reason WoW is the exception to that rule is because of the monthly subscription but that’s getting a separate blog post too. As for the Star Wars MMO it went Freemium not even a year after launch so…yeah.

This leads to one obvious question: Why do it?

The obvious additional monetary gain aside, we may never know.

My opinion of Micro Transactions in console gaming this: Outside Season Passes, It’s done in a way that doesn’t hurt the online gaming community. Having said that, I can only think of a handful of titles or franchises I’m familiar with where gamers feel either forced or enticed to buy DLC content to improve their enjoyment of a game they paid $30-$60 for. Earlier I said Fire Emblem Awakening’s DLC combined would cost almost 1.5 times the price of the game itself ($56). While I am of the opinion the DLC in this game is worth paying extra to enjoy, the majority of opponents of Micro Transactions would argue said content should have either had a Play Coin Payment Option or be unlockable by some other means.

That last option is the sentiment most gamers I’ve talked to in recent months feel very strongly about: “Why should I have to pay for extra content that should have been included from the beginning? <Insert Company Here> made an incomplete game on purpose to get people to pay extra to get the rest.” That’s a generalization of what folks are saying. And it’s a false assumption.

Mico Transactions have always been 100% optional in most cases, the sole exception outside a Season Pass that comes to my mind being Skyrim. In many niche games, extra in-game currency or stat points are a popular DLC item being offered. With Tales of Vesperia (Xbox 360) you could buy Level Packs in 5 and 10- level increments that when used in-game would level the entire party by that amount. The nice thing about that particular game is all DLC content purchased could be carried over to the next playthrough. You could also buy Gald but not Grade, which is interesting when you take the post-game Grade Shop into account.

Anywho, like it or not Micro Transactions will be around as long as the industry feels it’s equitable when used. This is a long-accepted fact. I waited until now to say this but while I don’t have a problem with Micro Transactions in console and handheld games, I do have a problem with Micro Transactions in Mobile Games. It’s also why I prefer to play handheld consoles instead of moble games even though I have an iPod Touch.  I get better-quality games and I don’t have to worry about beong tempted to throw money at a moble game I’d only play on occasion anyway.