Review: The Legend of Zelda: Orcarina of Time (Manga)

In case you didn’t know, I have played every release of Ocarina of Time and own 3 releases of the game: The one that comes with the Legend of Zelda Special Edition Collection (Both NES Games, both N64 games and the Windwaker Demo), the Virtual Console version on my Wii and the 3DS Port (OoT3D). Earlier this year I bought the English Manga for Ocarina of Time, A Link to the Past and Four Swords–the only Zelda games I’ve beaten. Those familiar with the franchise will note even though it’s called “The Legend of Zelda”, it’s really about Link’s adventures. Like the Final Fantasy games, each successive game has little to no connection to the one before it. The exceptions I’m aware of are the NES games, the N64 games (Majora”s Mask is a direct sequel to OoT), Oracle of Ages/Seasons (there is some crossplay involved), A Link to the Past, A Link Between Worlds (direct sequel) and Wind Waker (as I understand it, WW takes place in the LttP/LbW version of Hyrule but many years later).

Now on to the Manga. OoT is spread across two volumes. Like OVAs, the Manga skips over almost all of the sidequests in favor of narrowing the focus on the main storyline. OoT is considered one of the greatest games of all time and lets be honest: Most fans are insane and insanely defensive of the love of the game^_^

Does Akira Himekawa do the game justice? In a word: Yes.

Two bonus short stories are included with volume 2. One introduces the Skill Kid and takes place before the events of the game. It’s also believed to the sae Skull Kid Link encounters in the game as well as the one from Majora’s Mask. The other story is set during Adult Link’s adventures where Link helps a new fathered friend find the confidence to fly.

Honestly, the pacing was rushed in some cases and drawn out in others. One minute Link goes into Lord Jabu Jabu and the next he’s getting nagged by Ruto. In another instance, almost a whole chapter is spent on Sheik’s true identity and Link admitting to being in love with her. It’s not the fact that it took a whole chapter but it felt needlesly drawn out. I get they needed to make it accessible to those who might not have played the game but still. I think it would’ve been better if the story was spread across 3 volumes.

…Ah, well. I said said at the top, I also have the Manga versions of Link to the Past and Four Swords. I would only buy the Manga for the games I already beat for spoiler reasons XD 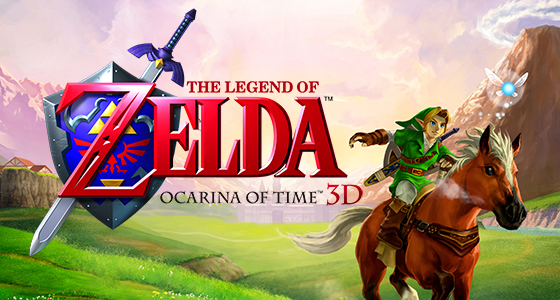 If you have a Nintendo 3DS, you can get the 3DS port. The graphics are crisper and cleaner compared to the Gamecube ports as well as being having the option for pop-out 3D.  The 3DS port also comes with Master Quest in which the bosses are harder and the dungeons are mirrored. It also has Boss Rush Mode in which you fight all of the bossees in succession to set the best time(s). Don’t have a 3DS but have a Wii U? You can get OoT via the Virtual Console!