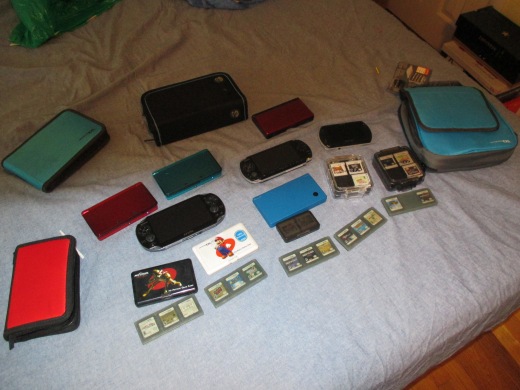 I figure I get this out of the way now before I get too busy later this month. Unlike last year, I wanted to give the honor to a game that wasn’t ported from an older system or a special edition release (see: Injustice: Gods Among Us and Mortal Kombat, which both come with all the DLC content from the console versions already in the game). This time, I also only picked games that were released in 2014.

One Male Protagonist. Seven Female Partners. Yep, you got yourself a harem XD

Also released on the 3DS, Conception II requires coordination between you and your seven female partners to make babies to assist you in dangerous labyrinths. I’m not joking though no there is no on-screen sex. There is some suggestive material yes and the obvious sexual innuendos (hence the Mature rating) but it’s mostly teasing and not actual sex you see.

Each of the seven Bachelorettes has their own story. The more you spend time with each one, the more you learn about them.  You can only take one girl with you on missions at a time so…yeah. There is some DLC content though it’s 100% optional. If you want access to every single possible class for your children then yes you want to buy the DLC content. It’s also nice the retail version comes with a Soundtrack CD with some of the music from the game (YAY!).

It’s hit or miss to be sure but for me it was a home run. Looking back, critics refuse to look past the obvious fan service and view the storyline as boring and uninteresting. I disagree obviously and at some point, I’ll eventually get around to finishing it XD

Now we go on my pick for the 3DS game of the year. This was actually a pretty tough choice as the fourth quarter of 2014 saw the release of alot of high-profile games.

So I’ve decided to give the honor to these three games in a 3-way tie:

Persona Q: Shadow of the Labyrinth

This is the game many say is Atlus’ final gift to the fans of Persona 3 and Persona 4 before Persona 5 is released sometime next year. They sure don’t disappoint. In Persona Q, worlds collide as the cast of both games and thrown into a new world with a slew of mysteries awaiting them.

Seriously, if you’ve only played Persons 3 or Persona 4 you owe it to yourself to play the other. They both have near-identical mechanics, an unforgettable cast and a gripping story. Persona Q is a mix of elements from the Persona games and the Etrian Oddysey games. You can summon Personas as well as do map making while exploring the Labyrinths.

The game was recently nominated by IGN as 3DS game of the year so…yeah. It’s actually only been out for 4 weeks and has a Game of the Year nominations =D

You’ll have the usual anti-DLC crowd whining about not wanting to pay for 100% optional features that they want to use. That aside, it’s a solid game with a ton of replay value to keep you coming back for more. I haven’t finished it yet (I think I’m 25% done?) but I’ve been playing it non-stop on my Blue 3DS ever since I beat Pokemon OmegaRuby. I decided to do my first playthrough with the Persona 4 cast. Once I beat the game, I’ll post the full review!

Easily a game worth buying a 3DS for if you didn’t already have one. Developed by Level 5 and Studio Ghibli (Ni No Kuni for the PS3). Famtasy Life is an open world RPG with a linear storyline and 12 playable classes. It’s basically an MMO without the MMO. Everything worth using you gather or make yourself. You can also recruit many of the major characters you meet to fight by your side in a party of three. There is even an expansion you can explore after you clear the main game as well as several other preconditions.

It’s more than just a niche game if you give it a chance. It’s a game where you find something new to do every time you play it.

Should come as no surprise.

If you’ve seen my past blogs about it, you know I more or less consider it 3DS Game of the Year. Bravely Default is basically Final Fantasy all but in name. It oozes with nostalgia from the early Final Fantasy era whilem oving the Genre into the future. Best part for those outside Japan: All DLC in the Japanese version comes with the North American and European versions free of charge.

There is a premium aspect, though: If you don’t feel like waiting every 8 hours you can buy an energy drink to trigger Bravely Second, which allows the party to attack (or heal) up to four times and even better, Bravely Second can be activated during the enemy’s turn =O

The deep story pulls you in and refuses to let go until the very end. All is not as it seems and that also goes for all of the party members: Tiz, Agnes, Ringabel and Edea. There are even two endings, both of which can be gotten in the same playthrough. The game boasts well over 40 hours and even has Streetpass to help keep things interesting.

All that’s left is to wait for the teased sequel!

…Whew. This post took me 3 days to write. I simply wanted to give the games that I’ve loved this year their due. Yes, I also have Sword Art Online: Hollow Fragment, Warriors Orochi 3 Ultimae, Super Smash Bros. 3DS, Pokemon OmegaRuby and Pokemon AlphaSapphire but those franchises will always be popular. Games like the four listed above tend to be overlooked in favor of games from established franchises. These games deserve to be remembered and it’s exactly why they are my games of the year.

That said, I consider 2014 to be the last big year for the 3DS as Nintendo prepares to roll out the New 3DS, which is basically the 3DS equivalent of the Nintendo DSi. Sony basically left the Vita to rot earlier this year so…yeah. January 16 will be my last day in Azeroth, which is about 5 days after World of Warcraft’s 10th Anniversary event ends. I bought a ton of games over the last 18 months I’ve barely even touched so…yeah.

This fourth quarter is actually the first time I spent less thsan $200 total on video games ever.

Shifting priorities is the reason more or less.  I’ll still blog about gaming but it will be less about the future and more on the past and present.