…Not since Abyss has a Tales game gotten such a muted reception by the North American fanbase. Even the forgottable Legendia got a warner reception and that’s saying something. I’ve played most of the Tales games released in the U.S. The only ones I haven’t played are Eternia, Destiny 1, Destiny 2 and Legendia. I have Xillia 1 and 2 though I’m going to wait until I’ve finished Graces f before I start on Xillia 1.

I’m going to do things backwards with this review and give you the rating first. I give Tales of Hearts R a 10/10 as-is. The DLC content doesn’t change that weather you buy it or not.

Now, about the game. Tales of Hearts R has all of the things you come to expect from a Tales game only it’s fun sized. It’s a full-length game. Before I forget, Hearts was originally released on the Nintendo DS a few years ago. Unlike the original, Hearts R is in full 3D and has an additional Playable Character. Chalcedony Akerman is playable in Hearts R but not Hearts DS. Just like Phantasia in which Suzu is playable only in the Game Boy Advance version.

Anyway like I said before the game has a number of things that are staple in most Tales games. A few such things include:

For those who don’t know, the “Judas” character is an indirect reference to the Apostle who betrays Jesus. All you need to know is the Judas Character in this game, like all the ones before them is a party member who betrays the group but later rejoins as an ally. Not saying who it is (for that would be epic spoilers) but unlike Symphonia or Vesperia, it’s fairly obvious who the traitor is after a certain point.

A “Loli” in the Tales games is the babyface of the team and they’re usually the youngest party member (Presea being an exception due to her Exsphere). Loli is short for Lilita (Female) and Lolito (Male). In most of the Tales Games their main role outside battles is comic relief (Anise and Beryl for example) though in some games they play a more significant role (Genis, Presea, Karol and Meredy for example). In Hearts R, it’s Beryl.

Mystic Artes have been around almost forever. Hearts R marks the return of Dual Mystic Artes, which is a Mystic Arte involving two party members during battle. It only works under very specific conditions but when it works, it looks awesome. The Devil’s Arms were introduced in Tales of Synphonia and were tied to the Super Boss of that game. In Abyss they’re called Catalyst Weapons. They go by a different name in Hearts R but their function is almost exactly the same. Like in Symphonia and Abyss, the Hearts equivalents are tied to the Super Boss. Once you’ve collected all 8 Shadow Soma AND defeated the Super Boss (To which I say bring ALOT of Life Potions), the Shadow Soma’s true power is unlocked. For every four enemies slain with the Shadow Soma, they become more powerful. It’s simply a question as to weather or it’s worth the time you’ll spend grinding fights to strengthen the Shadow Soma.

Even though the effects and the weapons can be carried over to the next playthrough (and unlike past games, you don’t need to collect the Shadow Soma and fight the Super Boss again if you don’t want to), it’s too much of a time sink to me.

Before I forget, Pascal and Hubert Oswell from Tales of Graces f can be battled in the Arena either one on one (Single) or four on two (Team). If you enter the single competition with a male party member you will fight Pascal. If you pick a female party member, you will fight Hubert. They both have their Mystic Artes from Graces f so be careful. Unlike past games, the Cameo Battle alone is repeatable after you win.

Even though the game was released with Japanese Audio, the text is in English. Those who’ve played Graces f probably already know Kohaku’s official English name is Amber Hearts. For the sake of being consistent I will use her Japanese name in this review. By the way, Kohak is translates into Amber, which is a type of mineral and fits the theme of the game. Almost everyone in the game is named for a type of mineral or gemstone. Hisui’s English name would be Jade, for example. Since the audio is Japanese, it made better sense to just use their Japanese names as much as possible. As a reminder, all of the story-related Skits use Japanese audio as well so…yeah.

One translation slip-up I do want to point out involves Kor. The audio track addresses him as Shingen even though the text says Kor. Both are correct though I blame Bamco for not taking the confusion into consideration. His English name is Kor, which is clever wordplay for Core. His Japanese name is Shingen. Switching gears for a bit, Hearts R has some particularly dark moments compared to past Tales games. At a certain point in the game, Kohaku is being tortured after the group is betrayed. It’s not the act itself alone (it’s not graphic but still a bit disturbing) but the person administering the abuse describing how to maximize pain in vivid detail while doing it that may make the scene a little uncomfortable for some folks.

Early on in the game, one character’s Despir-induced depression leads them to nearly flood an entire city and then try to commit suicide. Again, it might make some people feel a little uncomfortable. The one that took the cake for me was during a flashback sequence in which the game’s main villain Creed Graphite (while possessing another person) attacks both Kor and Kohaku’s mothers while they were pregnant with them. To add injury to insult, Creed enters Kor’s Spiria while still in the womb. With Lithia having entered Kohaku moments earlier in the flashback, this sets the stage for their eventual confrontation during the events of the game.

One cool throwback to all of the past swordsmen that came before Kor is how he learns Demon Fang (Majinken): After you’ve visited the final area, return to Kor’s house in Seaville twice. The first time, you’ll see a scene where a new Cooking recipe is learned. The second time, Kor will practice using Demon Fang with his old training Soma. You gain both Demon Fang and the Training Sword as a result.

In terms of pairings, Kor and Kohaku’s pretty obvious. It isn’t just teased but it’s set by the end of the game. Chalcedony (playable in Hearts R) also eventually confesses his love to Tourmeline by the end of the game. In a skit, it’s revealed they were betrothed in at an early age but the two drifted apart as Chalcedony began training as a Crystal Knight. Finally, Hisui clearly has it for Lithia but due to her role, it’s a relationship that can’t be in the end. 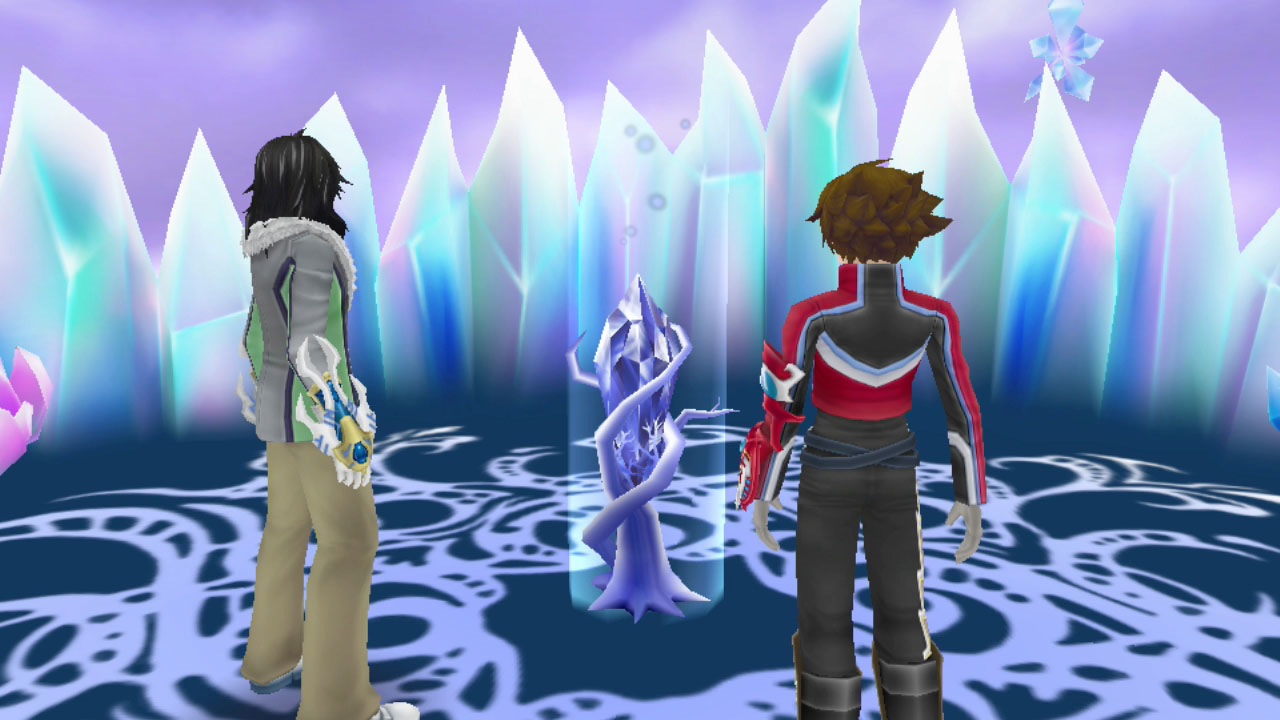 I’m going to end with this observation that I revisited shortly after I finished my first playthrough. I’ve noticed even though it initially only was released in Japan a few years back, there’s not alot of fan art or fan fiction. Those are gemerally pretty good indicators that there are more than a few people who like Tales of Hearts. Vesperia and Abyss both have over a thousand fanfics on Fanfiction.net so…yeah. Then again both also have an OVA going on for them.

Not blaming anyone one this one but like I’ve said to death about Abyss, Hearts R deserves a fair chance.