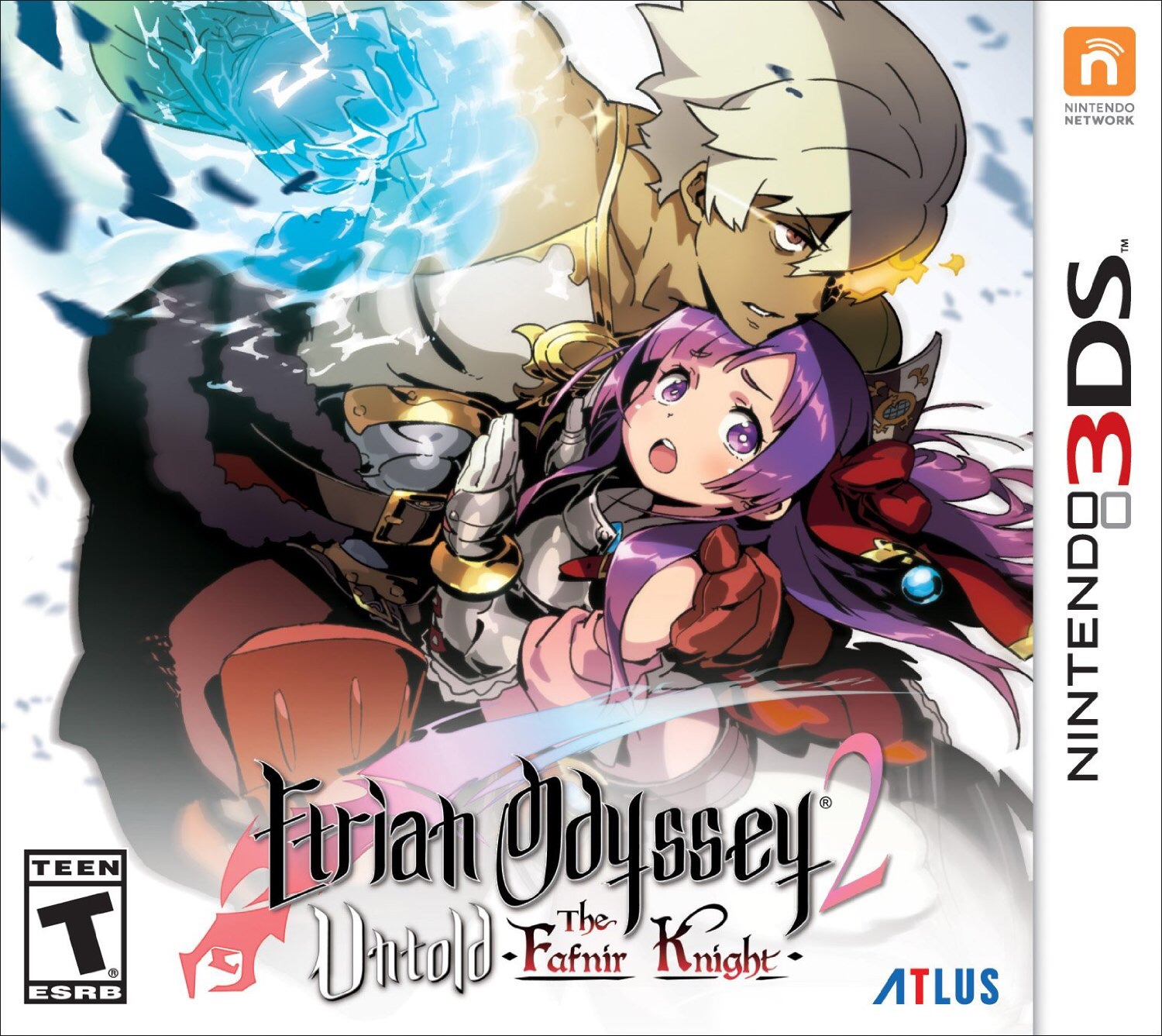 Story Mode is the just that: A more story-driven version of the original game with an original class. It was the Highlander Class (Player Character) and Gunner (Ricky) in the first game. In this one, it’s the Fafnir Knight (Player Character) and Sovereign (Arianna). I won’t speak to the plot but Atlus clearly used EOU1 as the base for the sequel and in my book, they made things better.

Like I mentioned above, the Demo version on allows you to play Story Mode. Like EOU1’s, you get the first 3 floors of the dungeon plus a third of the Ginnungagap. Hell, the only things you can’t use are Streetpass and Classic Mode. Everything else you have access to in the Demo. Now that the game’s out, even if Classic is your main goal I still advise clearing Story Mode first: The Story Mode characters and progress can be used in Classic Mode.

Before I forget, EOU2 DOES have DLC. Atlus confirmed on Facebook yesterday four sets of DLC will be released every week in August and even better, at least one will be free each week it’s released. Here’s the full list:

Anyone who played EOU1 knows how powerful the Highlander Class is. And it’s FREE if you buy EOU2 between now and this coming Sunday. I can confirm Wanted: Golden Sprout is a repeatable quest. Completing the quest gets you a ton of money. Plus, the item drop can be used in a cooking recipe so all the more reason to get it! Based on the pics Ive seen, the fourth one is fan service. The first one is just for those who wanna change class portraits.

All three are presumably repeatable.

The EXP Buff two weeks after the game’s release is no accident: By this time, EO Vets will have probably cleared both Story and Classic Mode at least once each.

I’ve heard of the Super Boss in this set: The Boss reportedly has 5,000 HP and auto-heals 600HP each turn. As noted, you will also need to be level 99 (the level cap) to challenge this original boss. One person on Gamefaqs confirmed a powerful weapon will be yours if you beat this boss on the Expert Difficulty. Boss Rush Mode presumably has the bosses from both Classic and Story Mode combined.

…Assuming you bought your copy of EOU2 this week, you will only pay $10 for all the DLC. That’s not bad at all. I’m sure there will be those who will continue to whine about the fact there is DLC at all. Even FREE DLC (“Should have already been in the game”). Ugh. Either buy or don’t buy. It’s not a hard thing to do.

Moving on, I downloaded EOU2 on my Red 3DS, which is the same one I put the first one on (I put EOIV on my Blue 3DS). EOU2 follows its predecessor’s lead and strikes that balance between being approachable for new players while offering a challenge to vets. That was what drew me into the first game. The game has a demo so you can try it before you decide if you wanna buy it. ALL of your progress from the demo is transferred to the full version of the game.

…Once I have cleared Story Mode, I will rate the game like always. Before I forget, go here for my review of EOIV and EOU1!