I first heard about it this morning but wanted to visit a few retailers today to confirm it: The 3D-less little brother of the Nintendo 3DS is now just $100. I’m honestly unsurprised and was expecting this. Including the 3DS XL and tne New Nintendo 3DS XL, Nintendo is managing FOUR 3DS-family handhelds in addition to the Nintendo DS Family consoles (DS, DS Lite, DSi and DSi XL).

I’m not surprised at all the 2DS was dropped to $100. Unlike the 3DS and 3DS XL, the 2DS lacks both the original’s 3D feature and the clamshell design the others have, meaning it doesn’t close. The 2DS can but put into Sleep Mode by pressing a button from what I understand. The console’s main selling point was a slightly lower price in exchange for no 3DS function. Aside from this, it functions EXACTLY like its counterparts including full backwards compatability with Nintendo DS games.

Of course, there are special cases travel for the 2DS as well as the 3DS of course. I have 3 such cases as you guys know: 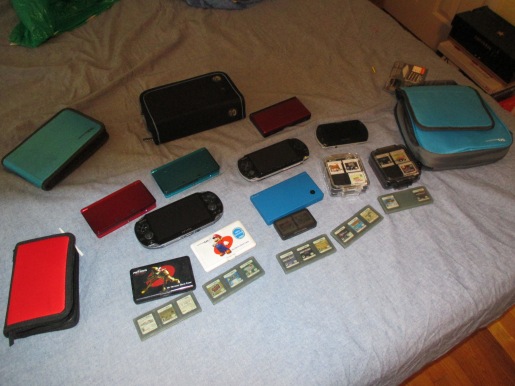 …The black one is used by my Vita.

Anyways, for those waiting for the price to come down on one of the current-gen Nintendo consoles, consider your patience rewarded. Production on the original Nintendo 3DS seems to have been drawn down since the prices for to get them New have gone back up to $180 and in some cases, $200. I plan to buy my third 3DS by the end of the year IF Nintendo doesn’t release the smaller version of the New Nintendo 3DS. I don’t like the XL-model consoles so…yeah.

As for why I’m getting a THIRD 3DS…well, for one I DID have 3 Nintendo 3DS consoles AND three Game Boy Advance consoles at one time but on separate occasions. Really though, the Streetpass Function has a hard cap of 12 games per console. Those who’ve owned their 3DS/2DS for at least a year and/or own more than 12 games with Streetpass have been there: Should I disable Streetpass on my Pokemon X/Y/OR/AS or Fire Emblem Awakening to make room for Shin Megami Tensei IV or Mario Kart 7 or should I disable Streetpass on Animal Crossing to make room for Tomodachi Life?