Fresh off the heels of getting confirmation one of the greatest modern JRPGs of all time is being brought the PS4 and the Vita, I have decided to post this review of the PSP version, which itself is a port of the PS1 game Star Ocean 2. While most ports and enhanced remakes are typically scoffed at and/or dismissed by gamers as cash-grabs, Second Evolution is one of the rare exceptions: Most Star Ocean fans consider Second Evolution the best game in the series bar-none.

By the time you finish reading this review, hopefully you will begin to understand why.

To start, Second Evolution is of course the followup to its predecessor First Departure, which itself is a remake of the first Star Ocean game. Second Evolution boasts well over 40 hours of playtime, has a postgame dungeon, two super bosses and has two protagonists. The first is Claude C. Kenny, who is the son of the two of the characters from the first game. His father Ronyx was one of the heroes of the first game. Claude is joined by Rena Lanford, whose origins is a mystery. It’s revealed towards the end of the game Rena, like Claude is actually from another world.

The two are joined by a colorful cast of characters throughout the game though it is worth mentioning you can’t get all of them in a single playthrough due to the preconditions for getting some of them. Four in particular–Leon and Chisato Noel and Dias–can only be recruited on Claude or Rena’s route respectively, for example. In addition, in order to get Ernest you will need to recruit Opera first. You will also have the choice of Precis or Bowman mid-game. You will also only be able to recruit Welch (also a playable character in First Departure) if you have the room late-game.

Second Evolution is fully voiced. I don’t remember if the North American version has dual audio offhand but I will double check on that. I don’t think it is, though. The first time I played this game, I played as Rena. I actually played it and then played the first game afterwards. Rena specializes in Healing Symbology (the series’ Magic system) though she fights bare handed and learns strike skills in addition to powerful healing skills. Like the “Tales of” Games, the battle system is in real-time: you control the lead character in the battle while the other three are AI-controlled though you can freely switch on the fly during battles at will. Claude is a swordsman and learns powerful sword skills. Celine, who is the first character most meet specializes in offensive Symbology. She’s basically the Ronyx of this game. Ashton is a dual-wielding swordsman cursed with two dragon heads when you meet him. After going through the trouble of finding out how to get the dragon heads exorcised, Ashton decides to keep them around. 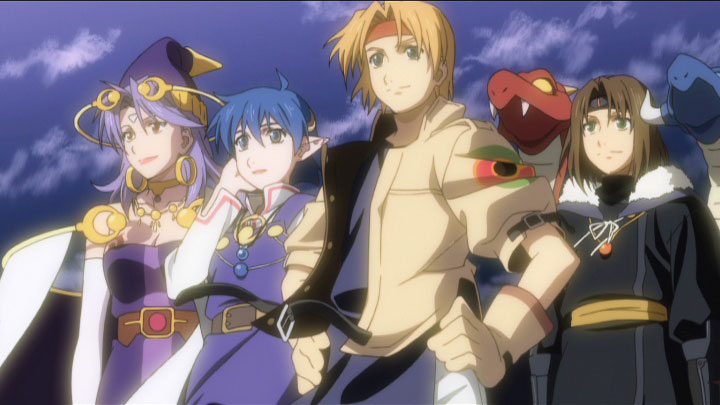 The game’s storyline gets non-linear outside major plot development, more so when you are trying to recruit certain characters: Getting Ashton to permanently join the party means going all over the place for example. Certain plot events are also different depending on weather Claude or Rena is the lead protagonist. As I mentioned earlier, two characters are exclusive to Claude or Rena’s route: Leon and Chisato for Claude and Dias and Noel for Rena. You are guaranteed to get Leon or Dias though Chisato and Noel have separate requirements to recruit each of them. I forgot to mention this before but the max size for your party is 8. Subtracting Claude and Rena (You get both regardless of who you chose as the lead protagonist) that’s six. I mention this also because getting certain characters depends on how many people are currently in your party when the opportunity arises.

Moving on, the game has an unforgiving learning curb at the beginning though as you level up, things begin to balance out. I reccommend saving frequently early on at every opportunity, especially when entering a dungeon. Money’s also tight until late game when you’ve leveled certain skills enough to make it a non-issue. By then, you’ll be able to make better items and gear than what you can buy so…yeah. Yes, the game has a crafting system!

Certain choices made will strengthen the protagonist’s bond with certain party members. On my first clear, Rena and Claude’s bonds were strengthened to the point they became a couple. During their paired ending, they are working for the Galactic Federation. When he gets back from a mission, Rena tells Claude she’s pregnant. Unlike First Departure, no canon pairings from Second Evolution have been confirmed though fans believe Claude and Rena being paired is canon since Rena joins the Galactic Federation by the time the (Japan-only) followup game happens. If they had a child or let alone are in a romantically involved with each other, it’s never mentioned in the sequel.

Anyway moving on, one of the biggest selling points of the game to fans are the villain arcs. The main villain isn’t set in stone until the Ten Wise Men are introduced and by then, the storyline shifts from Expel to Energy Nede–Rena’s homeworld. The big theme of the game is the idea once a civilization advances the point it can no longer develop–as was the case with Energy Nede–it has two options: Share its technology with undeveloped worlds (which the Ten Wise Men opposed) or be destroyed.

Upon using the final save point in the game, you will unlock the post-game dungeon though that statement is a bit misleading: There is no postgame per-se and no New Game+. Simply using that final Save Point unlocks a bonus dungeon. Defeating the boss of said dungeon will remove Gabriel’s limiter, making him obscenely powerful. Even the other super boss, which requires the whole party having a Music Rating of 10 to summon would flee in the face of Gabriel Unbound!

If you like old-school RPGs or the Tales of games, it’s an absolute must. The game easily has multiple playthroughs if you want to recruit everyone. Personal Actions shape the lead protagonist’s relationship with the other party members. The game’s storyline pulls you in from beginning to end and is a textbook case of HOW you develop characters right: During the Lacour Tournament, Rena’s relationship with Claude and Dias is tested. She helps Dias prepare for the tournament, which he wins (regardless of weather you play as Claude or Rena Dias wins).

Claude and Rena both also undergo massive development by the time the credits roll. At the beginnning, Claude is a rookie ensign who is suddenly thrust into an unfamiliar world and must fight to survive and reestablish contact with his father. By the time Expel is destroyed, Claude has developed an attachment to the friends he made and defies a direct order to stand with is friends moments before the planet’s destruction. His renewed resolve to stop the Ten Wise Men is when he really comes into his own. Rena’s child-like naivete is obvious when she mistakes Claude as a hero the first time they meet. She knows she was not born on Expel and she travels with Claude to try to find her birth parents. When she learns the truth on Energy Nede, she resolves to honor her birth mother’s final request and defeats the Ten Wise Men once and for all.

Rena then becomes the Kal El (Clark Kent/Superman) of Energy Nede: Its destruction makes her the last living Nedian in the universe. Three obvious differences being Clark was a baby when Krypton was destroyed while Rena was 17. The second was Rena met kinsfolk and learned of her origins before her homeworld was destroyed while Clark learned of his roots much later in life from a computer program. The third is of course Rena is the last Nedian alive (until she has kids though they would be half-Nedian) while Kryptonians who weren’t on the homeworld when it exploded may still be alive elsewhere.

…Whew. Went on a tangent at the end there XD

Anywho yeah, the Vita and PS4 ports are slated to be released “Soon” according to Square-Enix. Next to nothing is known about the ports other than it is coming and it has an improved translation. I have heard the game will be in full 3D though I don’t know if it will be “Tales of” 3D or if it will be Bravely Default 3D. Bravely Default 3D is pseudo-chibi characters with the world and battles being entirely 3D. “Tales of” 3D is anime-style with vibrant graphics though the world and battles are in full 3D. Second Evolution is more in line with Tales of Phantasia: 2D world with semi-auto-battle mechanics. In towns, the game switches to a top-down or angled from above camera that rarely moves. Hopefully we will learn more soon!

…By the way, the above picture is from Star Ocean 4: The Last Hope, which was released on the Xbox 360 but was later re-released on the PS3. The original Xbox 360 version was universally rejected on arrival by Star Ocean fans as a slap in the face. The hate is due entirely to the English Dub and Translaton. You guys know my stance on that so I’ll leave it there. I actually do have SO4 for the 360. Though I haven’t finished it since buying it, I have no problem with the English audio or the translation so…yeah.