Here we are with the first of many posts this summer on retro games I have played. This post will focus on video game sequels that quickly made folks forget about the original game. I’ll say this now: Putting this list together was made easier by excluding Final Fantasy since each game is its own story (though some have spinoff games). Don’t worry, Final Fantasy games will appear on other lists.

Anyways, almost all of these games I’m sure many of you have at least heard about from somewhere. Without further ado, we’ll begin with this game:

Street Fighter II: The Most Popular Fighting Game. EVER.

…Obviously I’m not pulling any punches: Let’s begin with the game that probably holds the record for one of the most re-released games EVER–a record Street Fighter IV came very close to matching, I might add–and is fun enough for folks to buy multiple copies of it. I played this game for the first time in the arcades like most people who did. My favorite character to play as is Ryu. Speaking of, you can play as him in Super Smash Bros. 3DS/Wii U along with his level from Street Fighter II.

Capcom was forced back to the drawing board due to the backlash over the difficulty of Mega Man’s (known in Japan as Rock Man) first game. All of the problems that made the first Mega Man game nearly unbeatable were corrected in the much-loved Mega Man 2. The formula was mostly unchanged from the original. It just focused on improving what worked in the original and what needed to be better tuned. To say MM2 saved the franchise can’t be said enough. I try not to think of what would have happened if the sequel wasn’t a success.

MM2 still stands as my favorite pre-X title. I have played the others but MM2 was my first so forgive the partiality. The Mega Man franchise may not have been as prolific as Sonic and Mario but it’s certainly had quite a good run. Good enough for Mega Man to be included in Super Smash Bros. 3DS/Wii U. Mega Man 2 was released on the Virtual Console though it was also released as part of the Mega Man Anniversary Collection (PS2, Gamecube and Xbox originally, re-released on newer consoles). 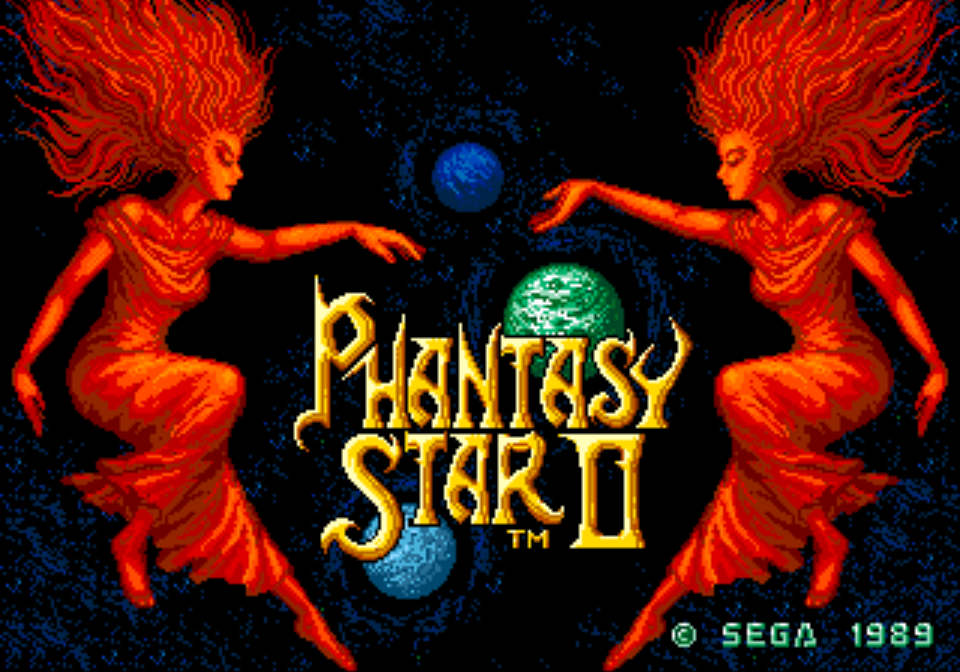 Like Street Fighter II, most who played PSII probably never heard of the first Phantasy Star. I actually played this game several years after I played Phantasy Star III, which is my personal favorite. As it happens, PSII is widely considered by many to be the beginning of a larger storyline spanning PSIII and PSIV. It is also the game Dark Force is introduced in. He returns again in the two games that follow. PSII has a deep learning curve that demands grinding a little. Saving opportunities are spaced out and battles can quickly wear you down: It’s often better to just take out foes than risk failing to run and giving your enemies a free round of attacks.

I actually haven’t beaten Phantasy Star II but I do own several copies of it. I’ve just been busy with other games. It’s known for its difficulty. Having put several hours into it myself, I can vouch for that. The game is also known for its music and turn-based battles. The game has been re-released bundled with other Genesis games: The Sonic Genesis Collection (PSP/Vita/PS3), the Phantasy Star Collection (Game Boy Advance) and the Sega Smash Pack Vol. 2 (Genesis) to name a few but you can buy it standalone from the Virtual Console or Xbox Live.

This game snuck on store shelves at a time Maxis was releasing several Sim Games during the mid-90s. I picked up a special edition copy of the game in the bargain bin at a K-Mart in 1998 for $15. I still own it now. I have logged at least 80 hours into this game. I would play no other Sim City game until I got Sim City 4: Special Edition 10 years later. I feel like Sim City 2k rewrote the blueprint for how a city sim should look like. It also highlighted the other fun part about building cities: Destroying them with disasters!

In the summer of 1997, I received a VHS containing a full preview of Starfox 64. I was sold by the time the credits rolled. Then I got the game, which introduced the device that has been staple in every console controller since: The Rumble Pak. Pop-Culture references this game would spawn 10+ years later are something else. Even more impressive is this is technically an improved version of the SNES Starfox: The Nintendo 64 title is fully voiced and in glorious 3D. That said: I’m probably the only person who doesn’t have a problem with Slippy’s voice. Then there’s Peppy’s iconic “Do a barrel roll!”

SF64 requires multiple playthroughs to see both endings and get all the medals for each world. This is also the game in which the Landmaster and the Blue Marine were introduced. The game itself was ported to the 3DS as a launch title but was also released on the Wii/Wii U virtual console and also got a Wii U remake. In my book, the best way to play it is on the original Nintendo 64. Fox and Falco are playable characters in the Super Smash Bros. games. Fox’s archrival (and sometimes ally) Wolf also appears as a playble character in Super Smash Bros. Melee (Gamecube), Super Smash Bros. Ultimate (Switch) and Starfox Assault (Gamecube).

And there we go. Like I said in the introductory post this afternoon, the most games I will cover in a single post in five. On that note, I have over 2,000 video game soundtrack pieces in my music collection. At least once a week, I will spend a blog post highlighting some of my favorite musical selections from back in the day. At the same time, almost all of my all-time favorite RPGs are from back in the day. Depending on the game, I will give it a full review instead of just talking about it. It mostly depends on the game ^_^

2 Responses to Retro Gaming: Sequels that outshined the originals