…Can’t fault them for trying. This is NOT a hoax or fan-made replica: Nintendo is actually releasing a special Mini NES console for $60, which will be released on November 11. It will comes with 30 preloaded games, all with the Save State Feature from the Virtual Console. You will notice the port for the Mini NES looks different from the originals: The Mini NES Controllers can be connected to a Wii Remote so you can play VC NES games with the retro controllers if you want. It also comes with an HDMI Cable so you can connect it to your flatscreen TV.

Nintendo confirmed the Mini NES will come with the following games:

There are a number of omissions from the list that prevent me from giving it a perfect 10, most of which can be bought from the Wii/Wii U version of the Virtual Console. The big X-factor not yet known is if you will be able to add games to it. Even so, the list is good enough for me to buy the Mini NES for my niece and nephew for Christmas =O

I would consider buying one for myself if it also came many of the following games:

Note the marked games: Of them, I think Nintendo could get cleared to re-release Duck Tales and Metal Gear. The rest, I don’t know. The vast majority of the other games have all been released on either the Virtual Console, Android/iOS, Xbox Live or the Playstation Network. I assume licensing for the third party titles in the final list is part of why it costs that much–I’d have priced it at $40 personally. 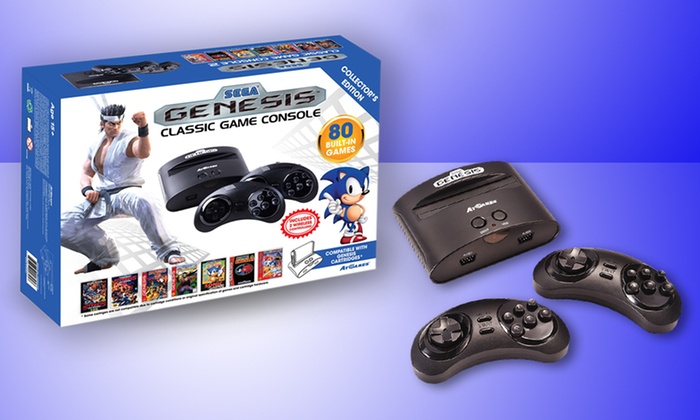 AtGames is releasing this retro Genesis–presumably in collaboration with Sega. I say that given Sega was the company that announced this a few weeks ago. It works the same as its NES counterpart only the controllers are wireless and you can use physical cartridges with. it also comes preloaded with some of Sega’s most popular mobile games, which are a part of the 80 it comes with.

…No, I didn’t recognize any of the games from the second list either. I get the manufacturer trying to get a return on its investment but damn. Rather than throw in random games those of us who gew up playing the original Genesis don’t care about, they should have included most of the games on the following list instead:

The MLB and NBA titles might not actually need permission from the leagues, who knows. Arch Rivals is licensed by Midway, which you may recall was the original license holder for the Mortal Kombat series (now owned by NetherRealm Studios). I don’t see the Capcom having much of an issue with allowing them to include the Genesis versions of Street Fighter II I listed. Disney could also greenlight Aladdin and The Lion King.

Sega does need to quit being cheap/lazy and just make sure to include all the games of the same series they do own the right to in future bundles–it makes no sense to include Sonic 1-3 but not Sonic 3K for example. Phantasy Star II and III are often packaged together but IV is often left out. Don’t even get me started on Shining Force I and II. LOL. That said, the fact that it is compatible with physical Genesis cartridges is a nice bonus.

…Oh, yes they did! There is a portable version of the device and it’s become super-popular with those with certain kinds of knowledge. I’ll put it this way: The portable version comes with an SD Card Slot and prettymuch says “Using the SD Card, you can download Genesis games to play on the handheld”. Yes, ROMs. Weather or not Sega was aware this was a possability when they signed off on it is anyone’s guess but yeah: You can legally purchase a portable Genesis Emulator for just $60. LOL, WHOOPS!

Taking that into consideration, the portable version has slightly more value despite the lack of 2-player. It has the same library as the console version so it’s a matter of screen size I guess. Lately, I just prefer portable gaming. I’d probably buy the console version for my niece and nephew, though.