…Ever since Transmogrification was introduced in Cataclysm, Blizzard promised to one day incorporate a unified system that would allow players to customize the way their characters looked. Transmogrification, or Transmog for short is WoW-speak for being able to change a gear slot’s appearance to something else. Every slot uncluding non-shield offhands but excluding Necks and Rings can be customized.

Mists of Pandaria introduced Void Storage, which was a temporary fix. Void Storage granted players additional storage options to safely store gear from old content they didn’t want to get rid of. A Regeants Tab was added in Warlords of Draenor as well as other housekeeping options to help players better conserve their Bank Storage options. WoD also introduced the unified Heirloom UI, allowing you to use Heirlooms with every character on your account present and future.

The Legion pre-patch added all of the features of Legion EXCEPT the new Broken Isles Quest Area (goes live August 30). It’s technically been downloaded to your machine weather you preordered or not. Buying the Expansion simply unlocks the Broken Isles, the new Demon Hunter Class (Blood Elves and Night Elves only) and a Free Boost to Level 100 (same as the Boost to 90 introduced to WoD, it allows you to Boost a character so that it can jump into the latest tier of content).

Getting back to the main topic, the new Transmog system not only adds a level of customization options never before seen in WoW, it also encourages players to play older content to get certain transmogs. I gave the new system a good test run when I soloed Ulduar 25 and Icecrown Citadel 25 Heroic–yes, both are very doable as a level 100 Ret Pally with Level 700 gear–in the last 24 hours: Gear slot items your class and Armor type can equip is automatically added to the Transmog UI.

Let me explain that a little better by first saying this: The Pre-patch not only enabled Gnome Hunters (it was only announced via social media) but Blizzard also changed how classes that changed armor types not function. What this means for Paladins, Warriors, Shamen and Hunters–all classes that start as Mail/Leather but later upgrade to Mail/Plate–is they now start with the second Armor type from the beginning. I don’t even want to begin to imagine the amount of work that went into making the necessary changes for every single piece of gear already in the game, nevermind the fact Survival Hunters are now Melee and use Polearms.

It is also important to be aware of ALL the weapon types a class mainly uses across all their specs:

This is important to be mindful of when soloing Old Raids and Dungeons for Transmog Designs: I discovered when I ran Icecrown Citadel and Ulduar only Transmog Designs my Paladin could actually use were added to the UI. I picked up Mail, Cloth and Leather gear from boss and trash kills that were not added to the UI. I also picked up Staves, Bows, Daggers and Fist Weapons with similar results.

Blizzard explained it’s set up this way on purpose when Legion was in Alpha: You WILL have to play most of the classes if you want to get specific transmogs. If you’re farming Straholme for the mount for example, you’ll just have to accept the fact some transmogs will not be obtainable depending on the class you run it as.

I can confirm the Tabard tab works as intended. I can’t remember offhand if teleport and Rep effects transfer when you transmog and haven’t made time to try it yet.  So, no more having to buy faction tabards for every single character anymore. 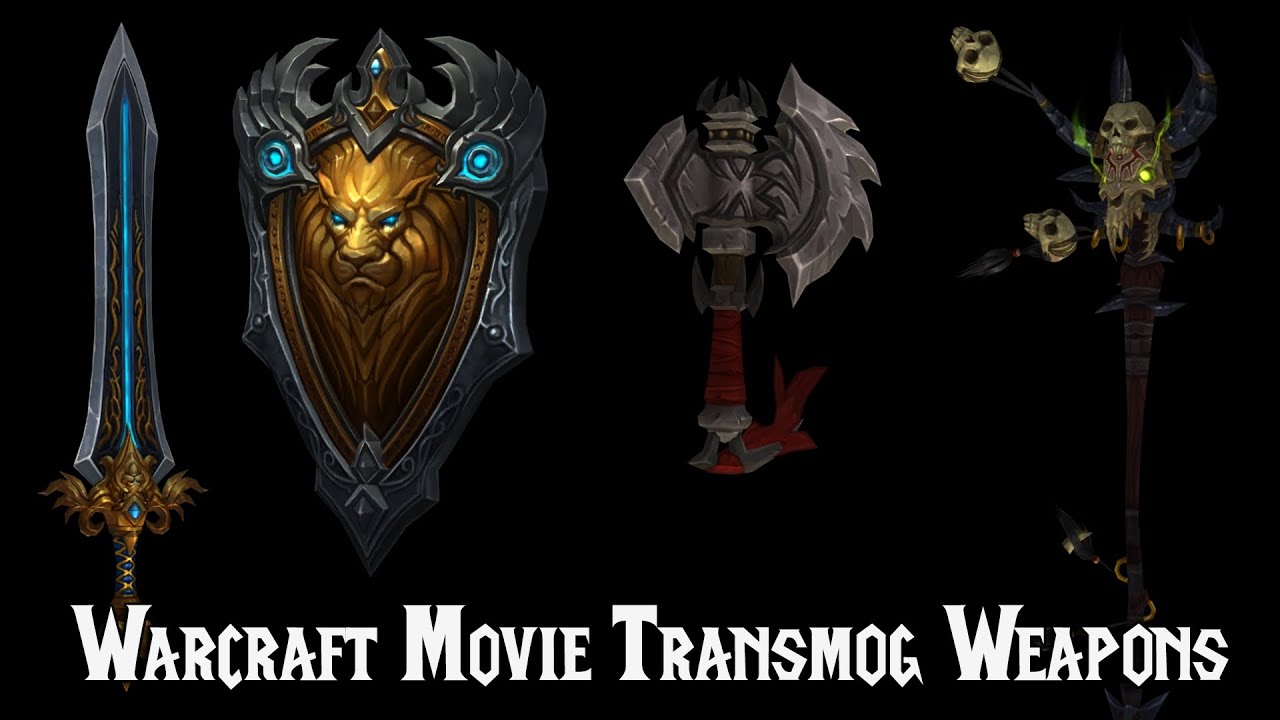 …For those of you who failed to log into WoW by August 1st, you may have another shot at getting the movie transmogs after all: There are unconfirmed reports the home release version of the Warcraft movie (DVD/Blu-Ray) will come with a redeemable code for the transmogs as well as the Battle Chest + 30 days of game time those who bought a movie ticket got.

I was able to confirm you can make a Starter Edition Account and still claim the Movie Transmogs + Achievements. You simply need to log into the gamw as an Alliance and Horde character to claim all four transmogs (plus two achievements). The ones on the left are a Sword and Shield for the Alliance. You can dual wield the Sword (via Transmog) as a Frost DK or Windwalker Monk if you want. The Axe is Two-Handed (Can Dual Wield as a Fury Warrior) and the Staff is actually Gul’dan’s from both the movie AND the game, both Horde exclusive. SWEET! I do know there is a recolored version of the Axe and Sword in-game. I’m sure the Shield and Staff are faction-exclusive and will stay that way.

Anyway, transmog will entice players to either roll alts or go back to old content to get transmog designs they might have missed before. It certainly helps the WoD Pre-Patch changed legacy tier sets from Pandaria on down to cost Gold instead of Justice/Valor. This makes is much easier to quickly pick up legacy armor from Vanilla to WoD. The raid gear tokens used to exchange existing tier sets for upgraded versions are still in place. By my reckoning, it will take me another run or two of ICC to finish the my Paladin Set. I certainly plan to spend most of my downtime in WoW hunting for Transmog Designs come Legion!