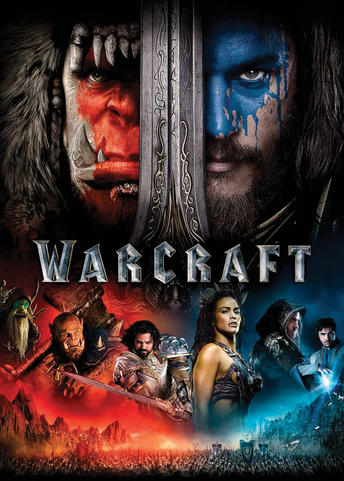 …It took Blizzard TEN YEARS to deliver on the promise it made back in 2006 that there would be a Warcraft movie. In the decade since then, the world was introduced to the Lord of the Rings Trilogy and its prequel trilogy The Hobbit. One of the biggest praises fantasy fans had for the LOTR movies was their depiction of elves.

…On the other hand, one of the biggest complaints fantasy fans had with LOTR was its depiction of Orcs:

Fans of the Orcs of the Warcraft universe had reason to be concerned when Blizzard announced a movie would come. Here is an early picture of Warcraft’s Orcs: Of course, the Warcraft universe’s Orcs were very different from the ones in LOTR. In the 2000 game Warcraft III, it’s revealed the Orcs are not the bloodthirsty killing machines they had come to think of themselves as only being good for. One of, if not the biggest point of critique fans of the Warcraft universe would have for a Warcraft movie is getting the Orcs right. It’s an iconic race and as has been revealed in the 16 years since Warcraft III, they have a rich and deep history steeped in honor and tradition.

I’m pleased to say Legendary pictures got it right.

Given Blizzard co-founder Chris Metzen co-produced the movie, of course they’d get it right. Having finally seen the movie for myself for the first time on DVD a few week ago, it truly was a labor of love. It’s both recognizable to Warcraft fans and accessible to those who know nothing of the Warcraft universe. It will help those who don’t “get” it understand the World of Waraft. *Rim shot*

The movie itself loosely follows the plot for the first game Warcraft: Orcs & Humans. Some changes were made, mostly due to time constraints that are different from the established lore from the video games and novels (Lord of the Clans and The Old Horde). Here are the changes:

Those are the noteworthy ones that immediately come to mind. There are references and nods for Warcraft fans throughout the film  as well.

Here are just a few of the noteworthy ones:

While the Warcraft movie did well internationally and ultimately broke even, it could very well share the same fate as The Last Airbender (movie adaptation of the first season of Avatar: The Last Airbender): Not a bust but not profitable enough to do the sequel. To top it off, the movie wasn’t mentioned at all at BlizzCon earlier this week.

At this point, Legendary Pictures and Blizzard have three options as I see it:

Before I continue, here is Legion’s Opening Cinematic for reference:

It is worth noting moviegoers got a voucher to play World of Warcraft up to the previous expansion, Warlords of Draenor + 30 days prepaid time (as well as having the option to upgrade to Legion of course). It’s called the Warcraft Battle Chest, which grants you the game up to previous expansion and 30 days prepaid time. It would normally cost you $30 + $15, $41 or $67 for a 1, 3 or 6 month sub (recurring or prepaid) + $50 if you want to upgrade to the current expansion (In this case, Legion).

It’s cross-promotion and is actually a clever way of allowing those who watched the movie but are unfamilliar with the Warcraft universe to explore Azeroth fans have come to know and love as a member of the Alliance or Horde (or both if you want). There are 13 playable races, 12 classes and 3 worlds to explore (Azeroth, Outland and Draenor). As someone who started playing WoW almost 10 years ago, there’s something for everyone in my honest opinion.

Anywho, those who buy the home release (DVD or Blu-Ray) get the same voucher. I used mine and can confirm it can also be used to upgrade Starter Edition accounts (Starter Accounts can play for free up to level 20 as well as other restrictions) to the full game and gives it 30 days. Those who buy the home release will also get serial codes to unlock Gul’dan as a playable character in Heroes of Storm (as I mentioned before) and a Medivh card in the Hearthstone card game (100% Free to play). A Battle.net account and a computer are required to redeem the serial codes.

…Like I said before though, it’s up in the air as to weather or not we will see another Warcraft movie. The movie franchise wasn’t mentioned at BlizzCon and that isn’t a good sign for those wishing for a sequel.

Mind you, I WANT a sequel.

The story can branch off into several directions. The common fan theory is the second movie is it will focus on the divisions within the Horde eluded to at the end of the first movie and the formation of the Grand Alliance (Lordaeron, Stormwind, Ironforge, Gnomeregan, Quel’thalas, Arathor, Alterac, Kul Tiras and Gilneas). Arthas and Thrall would also be introduced for the roles they would play later. It would end with the Horde being defeated and the death of Gul’dan at the Tomb of Sargeras. They could actually bring back the guy who played Medivh to play Uther the Lightbringer.

The third movie would focus on Thrall’s rise as the new chieftain of the Frostwolf Clan (as eluded to at the end of the fist movie) and getting Doomhammer from Orgrim, leading Orcs to Kalimdor where they meet the Tauren and form the New Horde. Orcs’ story would end with Thrall and Grom slaying Mannoroth. The Human side would cover the rise of the Scourge in Lordaeron and Arthas’ battles with Mal’Ganis. It would end with Arthas getting Frostmourne and his return to Lordaeron…as a Death Knight. The movie would end with the Night Elves being officially introduced after being eluded to during the Orcs’ story where Tyrande and Malfurion meet Thrall and Jaina, agreeing join forces with them to fight Archimonde and the Burning Legion.

The fourth movie would focus on the fallen kingdom of Lordaeron and the Death Knight Arthas conquering Quel’Thalas as well as the long-secluded Night Elves stepping out of the shadows to fight with the Horde and the Burning Legion. Illidan Stormrage would also be introduced. The Forsaken break away from the Scourge as the Sindorei work with Illidan to attack the Frozen Throne. The movie ends with Arthas dueling Illidan Stormrage and then becoming the Lich King himself.

…This would catch the story up to the beginning of the lore in World of Warcraft.