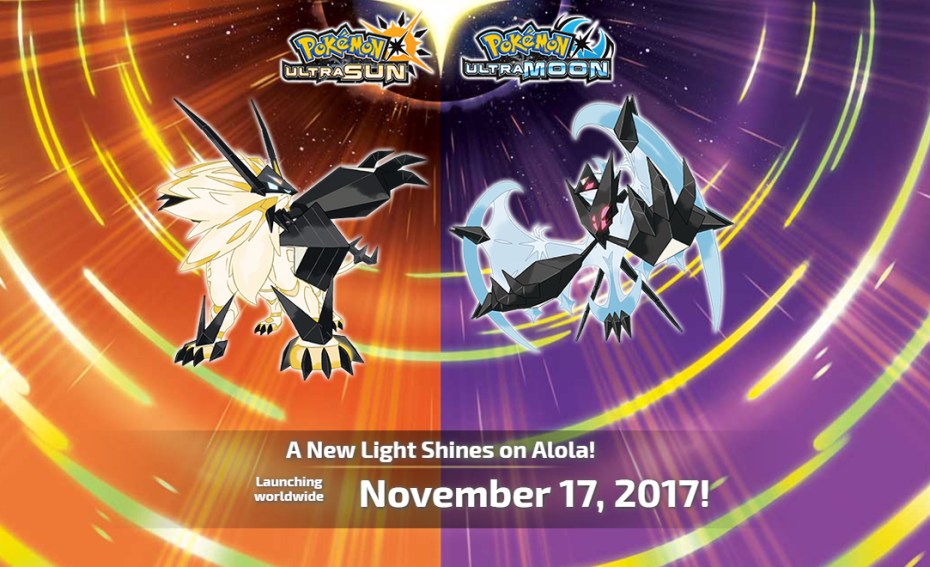 …To the surprise of no one, the question of what the companion to Sun and Moon will be seems to have been answered. UltraSun and UltraMoon (U-Sun and U-Moon for short) come to the 3DS this Fall the week before Thanksgiving so be thankful ^_^

If I had to guess, Nintendo will enable Poke Bank compatability for U-Sun/U-Moon ahead of their release and likely when Pokemon Gold and Silver are released on the Virtual Console in September (More on that in a bit).

What do we know about U-Sun/U-Moon? This:

…That’s prettymuch it. We know nothing of the games’ story though to be fair, the games were just announced today (LOL). Will it be a whole new story like Black 2 and White 2 or will it be an enhanced version of the current story ala Yellow, Crystal and Emerald? Time will tell ^_^

This brings me to the other big news I care about: Per popular request, Gold and Silver are coming to the Virtual Console. Now, the question to be asked is will Crystal follow? According to a picture I saw while I was looking for the above image, I would be VERY suprised if Crystal’s release isn’t announced as well =O

Thanks to the Virtual Console versions of Red, Blue and Yellow we know Gold and Silver will emulate trading using the console’s wireless feature. I almost forgot the original Gold and Silver introduced the Mystery Gift feature, which allows two players to receive a random useful item using the Game Boy Color’s infrared sensor. The 3DS family consoles have an infrared sensor so this feature will likely return ^_^

The 2nd Gen Pokemon games are actually considered two of the best handheld games of all time for a variety of reasons. For those who either need a refresher or didn’t know, the 2nd Gen games introduced ALL of the following features that have been staple going on 20 years now:

…I’d say that covers everything more or less.

In short, Gold and Silver are must-haves if you have Sun/Moon or the 1st Gen VC games or both. Presumably the cross-Gen transfer to the 7th Gen will be one-way. The difference is if you already have the VC versions of the 1st Gen games, you can breed the starters, the Hitmons, Eevee + Evolutions, the Fossil Pokemon and other Pokemon you only had one of up to now.