Putting together my top-10 list of must-have RPGs on the 3DS, this one definitely makes the cut if not an honorable mention. Originally released back in 2015, I came across the Demo last October on the eShop.  The Demo covers all of the first chapter of the full game, which is also the game’s tutorial. There is no data to carry over since you don’t get access to inventory + item storage until the second chapter. In terms of storytelling, this game is top-notch. It was developed by Sega but published by Atlus.

The story has a diverse cast. Through unique sidequests, all the playable characters are well fleshed-out. If you want to max out your Affinity Level with everyone in a single playthrough, you will have to wait until New Game+ though. Speaking of, the only thing carried over each playthrough is your money though with New Game+ you gain more money and EXP. Nothing else.

Prettymuch, once you’ve beaten the game twice (it has two endings) you’re done with the game. Once you max out your relationship with someone, you can just save after downing the final boss and reloading that file to pick another paired ending to see. I saw Lisette’s and unsurprisingly, she and Alto get married and settle in Mithra. Lisette’s mother jokingly implies they need to start making babies. 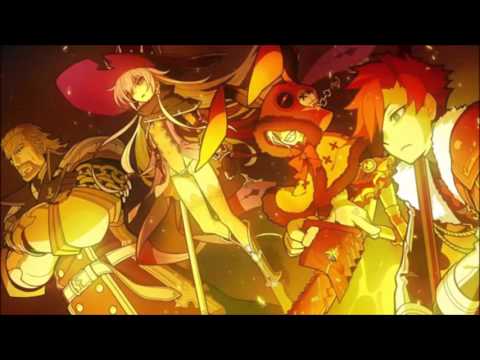 The main villains for most of the game are the Harbingers: Hilda, Dante, Dorothy and Hrodulf. You find out when she’s first introduced that Hilda is a Witch just like Lisette, Popo, Sakuya and Mordimort. Or is she? One interesting clue you get in the Second Chapter is there ARE supposed to be five witches of 5 Elements: Water (Lisette), Wind, (Popo), Fire (Sakuya), Earth (Mordimort) and Time (Hilda). At a certain point in the game, Hilda reveals to Alto she IS the Witch of Time as well as the Witch of Destruction she’s come to be known as (among other things I won’t spoil!).

During the game’s climax a traitor is revealed and the Harbingers end up joining Alto and the others. I won’t spoil the details but yes, Hilda does become a playable character along with Dorothy and Dante. The Mysterious Artificial Being Giselle will join Alto once you’ve maxed your relationship with a certain character before the game’s climax.

There is one interesting change from the Japanese version that is indirectly referenced during the game’s Hot Springs scene (I know, they seem to be in every JRPG these days LOL). I’m talking about Ewan, who is in the Men’s Bath but shown wearing a towel to cover “his” chest. Apparently, the original plan was for it to be revealed Ewan is really a girl posing as a boy when you max your relationship with him. This was removed from the finished product though.

Another thing of note–and this IS a MAJOR spoiler–Alto is revealed to be the Hero Elcrest. A huge clue to this is when you tune a Witch during battle, Alto’s eyes are Golden just like Elcrest’s. 1,000 years earlier, Elcrest was severely wounded and almost died (The official record states he died after the final battle). The Water Witch Francesa used her Qualia to heal him in the area that eventually became Mithra. We do know Alto was discovered by Risette and her mother 3 years before the start of the game and had no memories of his past life as Elcrest. Once he regains full access to him past self, the two become one. Hilda kinda figured it out early on but didn’t say anything since Alto clearly couldn’t remember his past self.

…Overall, I give Stella Glow a 9/10. The lack of a proper New Game+ is why I took a point off. Being able to carry over Items and Orbs at least would have been nice. It’s a definite must-try though. An added incentive to buy it digital is you get a free Theme with the game. I bought mine physical though so…yeah. If you’re into Strategy RPGs you will not be disappointed with Stella Glow.