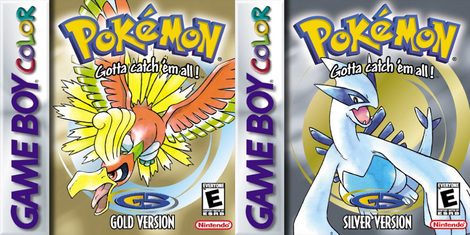 …I plan on doing this with the original Red and Blue and their Game Boy Advance remakes FireRed and LeafGreen, likely in February or April. I already did it for Ruby and Sapphire and their remakes OmegaRuby and AlphaSapphire two years ago so…yeah.

Now that the original Gold and Silver have (Finally) been re-released (on the Nintendo 3DS Virtual Console), I have decided to do this little compare and contrast for folks regardless of which you prefer. Personally, I like both versions. LOL.

I’ll pause the list for a bit and explain further:

Those who played Pokemon from the 3rd Gen on knows Gastly and its evolutions know the ability Levitate, which neutralizes their weakness to Ground-Type moves. Since Abilities don’t exist in the 2nd Gen, you could import a Level 30 Dugtrio (highest level you can use from trades with your badges at that point) with Earthquake and sweep Morty, the Ghost Gym Leader without taking any damage.

Let’s look at another Pokemon: Magnemite and its evolutions. Magnemite sometimes has an ability called Magnet Pull, which prevents Steel-type Pokemon from being switched out. This can make catching a wild Magnemite tricky if your lead Pokemon happens to be a Steel type but it can cause you problems since both of Jasmine’s Magnemites know Magnet Pull in the remakes.

I mentioned the reclassing of moves: Before the 4th Gen, Rock Slide was a Special Attack. Starting in the 4th Gen it’s considered a Physical move. To take it a step further, look at the Elemental Ice/Fire/Thunder Punch, which certain Pokemon naturally learn and are TMs in the originals: They are all physical movies starting in the 4th Gen since the user makes physical contact with their opponent. Why do you need to know this? Certain Pokemon Abilities are triggered by physical contact from the opponent. For example Static, which Pikachu and Mareep (and their evolutions) have: There is a 30% chance Paralysis will be inflicted on the opponent who makes physical contact with them.

Again, it’s an extra layer of strategy that needs to be taken into account in the remakes that you don’t in the originals.

Breaking news: Pokemon Crystal has been confirmed to be coming to the 3DS eShop’s Virtual Console on January 26, 2018. Pokemon Crystal was set apart from Gold and Silver for 3 reasons. One was it was Game Boy Color exclusive. The second is the Pokemon Sprites are animated, which was likely why it was GBC exclusive. Third, you had a guaranteed shot at the legendary Pokemon Suicune without having to find it first.

It has also be revealed that unlike the originaal U.S. release, you will be able to catch Celebi in the U.S. Virtual Console version of Pokemon Crystal. This wasn’t possible back in 2001 as the Japanese version had an exclusive prehep that allowed one to connect their cellphone to their Game Boy Color. The Japanese version of Pokemon Crystal contained additional features that made use of the mobile phone adapter including the ability to trade online in Japan. Said features were obviously excluded from the U.S. version since Nintendo scrapped bringing the mobile adapter to the U.S. at the last minute. If you used a Game Shark on Crystal you already know the coding for Celebi was obviously still in the game.

If I had to guess, Nintendo will modify the coding to make Celebi an in-game event Pokemon once certain conditions have been satisfied. One of the conditions in the Japanese version was to collect all 16 badges. The other three involved the features excluded from the U.S. version. My guess is beating Red or completing the Pokedex will be added in the U.S. version as requirements to catch Celebi. The Time Travel Pokemon will be level 30 so prepare accordingly!

Speaking of Pokemon Crystal. Those who played it as well as HeartGold and SoulSilver will have noticed the Eusine storyline involving Suicune was brought back. What this means is in Crystal as well as in HS/SS is you have a guaranteed shot at catching Suicune. You will still need to do the legwork for Entei and Raikou though.