…To say Fire Emblem Warriors was one of, if not the most anticipated Nintendo + Warriors Crossover game goes without saying. Of course, the only other is the smash hit Hyrule Warriors game. Fire Emblem Warriors holds the distinction of being the first non-port and non-remake game for the New Nintendo 3DS, which of course has backwards compatability with Nintendo 3DS and Nintendo DS games. It only took 2 years since the console’s release back in 2015!

Fire Emblem Warriors was also released on the Nintendo Switch but this review is for the version I own, the New Nintendo 3DS version. Aside from graphics, sound quality and controls, both versions are prettymuch identical just like Hyrule Warriors and Super Smash Bros. 3DS/Wii U. Henceforth I will refew to Fire Emblem Warriors as FE:W for the rest of this post.

FE:W boasts of roster of 33 characters including the 9 DLC-only characters, 6 of which have been released so far. The cast comes from four of the most recent Fire Emblem titles:

Anna, who has been a playable character in every Fire Emblem game since Awakening is an unlockable character but takes some time and effort: You will need to first complete an illustration and then completing a certain mission afterward. It takes time as well. This Anna, like the one in Fates is a Bow user just so you know. The other two playable characters are the Lords of FE:W, Rowan and Lianna. They both play the same way and use the same weapon type (Sword). Everyone else is unlocked by playing through Story Mode.

As noted above, Male Robin and Female Corrin are Canon for the purposes of this game’s Story Mode. For those who never played Awakening or Fates, Robin/Corrin’s gender can be freely chosen by the player at the start of the game. The dialogue is slightly different depending on Robin/Corrin’s gender but in the games’ video cutscenes the gender isn’t directly referenced to keep it ambiguous. Even after you unlock Female Robin and Male Corrin and switch to them in Story Mode, it has been only coded for Female Corrin/Male Robin for the story content.

Those who played Fire Emblem Fates: Birthright and/or Fire Emblem Fates: Conquest knows the conflict between the Kingdoms of Nohr and Hoshido is the main story of both games with Corrin forced to chose one or the other. In the DLC-Only third campaign Revelations in which Corrin sides with neither Nohr or Hoshido, the royals of both games join forces. So, Xander and Ryoma joining forces in FE:W is technically canon.

I’ll give Intelligent Systems and Koei Techmo credit: They did a masterful job blending the mechanics from both Fire Emblem and the Dynasty Warriors and Samurai Warriors franchises. Yes, there is even Perma-Death (optional as of Awakening). Those who played the older Fire Emblem games know this but when a non-Lord character falls in battle, you lose them for good. When a Lord falls, it’s instant game over. As of Awakening, you can turn this mechanic off but I won’t digress further. My point is to the ire of most Fire Emblem vets, the franchise opened the series up to people new to the series. FE:W is no different despite the fact it is, to put it simply a Fire Emblem-themed Warriors game. 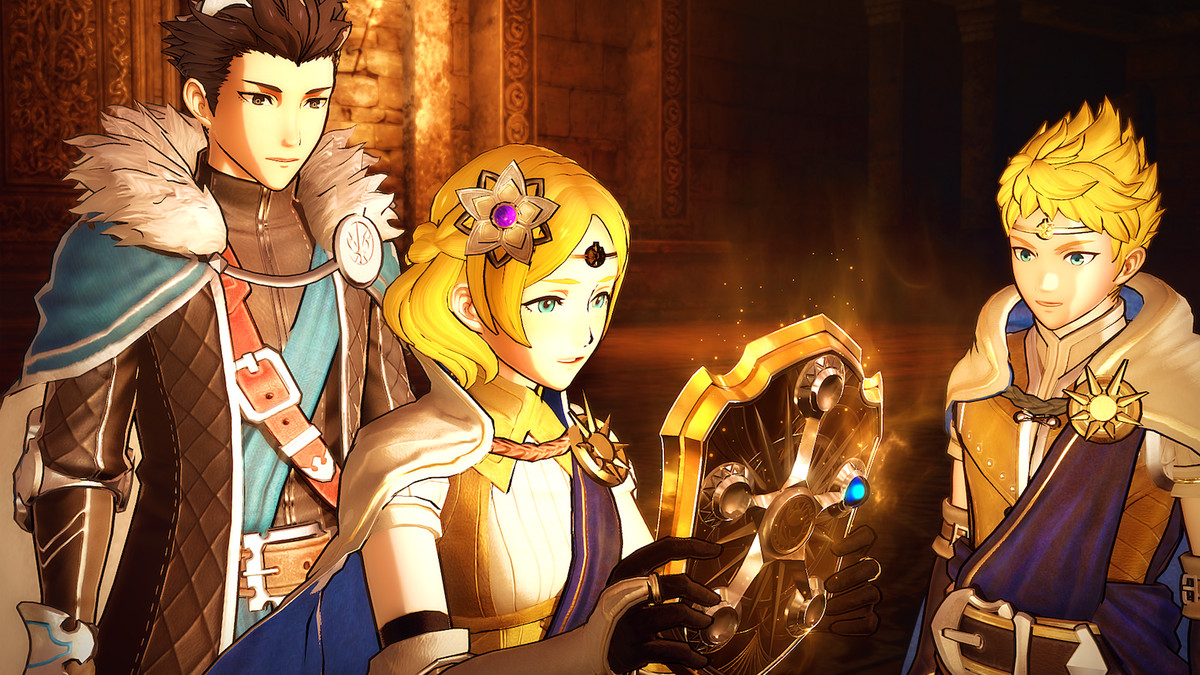 The game is split into Story Mode and History Mode. In Story Mode, Aytolis’ Twin Royals Rowan and Lianna recruit Heroes from other worlds to help them save their kingdom and slay the Chaos Dragon. This is the second Fire Emblem title after Sacred Stones to feature twin protagonists and the third including Shadows of Valentia to feature two main Protagonists. The difference is there are no branching storylines like there are in the other two Fire Emblem games I just referenced. There actually is a split during the portion involving the Fates Cast spanning 6 chapters (3 for each side) but everyone gets together again after that. Darios, the Prince of the Gristonne assists the twins until a certain point in the storyline. I won’t say more than that for plot reasons but yes, he does become an enemy.

Clearing Story Mode at least once is required to unlock Lunatic Mode and that’s when things get real. You actually do need to complete Story Story Mode on every difficulty if you want to complete the Illustrations. This is in addition to clearing History Mode Scenarios. 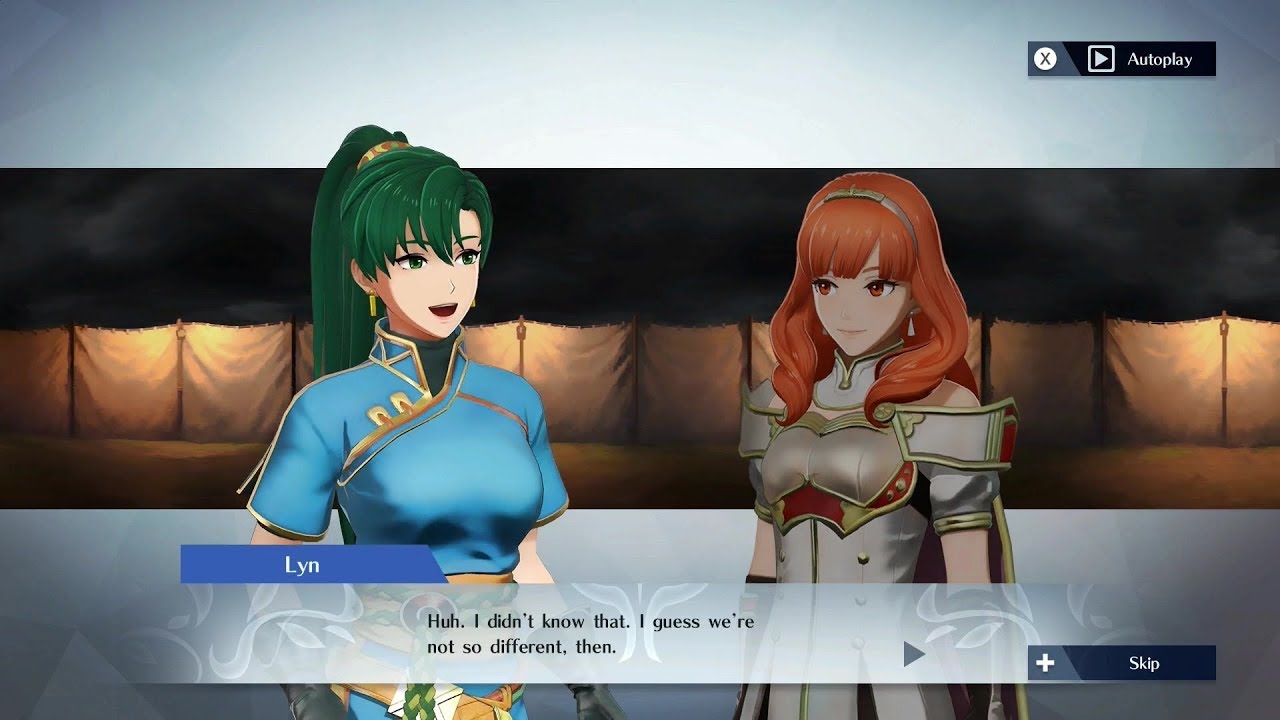 Even though they are not a part of story Mode Lyn, Celica, Anna and the DLC Characters (and the Female Robin/Male Corrin) do have Supports with the canon cast as well as each other. Every character has abilities that require you to get a Max Support with a specific character. Clearing some of the more challenging History Mode Maps does require you to level characters to 90+. Not just 1 to 4 but almost all of them in some cases: Some of the History Mode matches do have special restrictions such as Mounted Only or Bows Only. What this means is if you haven’t been leveling certain characters, your best bet is to grind some Story Mode Maps on Lunatic for Gold, then use that to Power Level underleveled characters.

Overall, I give Fire Emblem Warriors an 8/10.

It’s a solid, solid game and you can’t help but give props for striking a hard balance: it’s game those familiar with both Fire Emblem and the Warriors games will enjoy but doesn’t assume one is familiar with one or both games. I took two points off for two reasons: The first and biggest is physical copies of the game New Nintendo 3DS version may randomly glitch and crash while browsing menu screens. The problem does not exist in digital copies of the game, only physical copies. Nintendo has released patches with every DLC release to address this in problem as well as upgrade the game. The game doesn’t glitch and crash during battles but clearly a longterm fix is in order.

The other reason I took two points off is because of the fact all of the known DLC content was announced in advance and no new DLC content has been announced since. Anyone who’s been reading this blog for years should know I have a very favorable opinion of DLC when it makes sense. In the case of FE:W, more would make sense. A Shadows of Valenia Pack featuring Alm, Mycen and Nomah would be cool. So would a Path of Radiance Pack featuring Ike, Soren and Mist as well as a Radiant Dawn Pack featuring Micaiah, Sothe and The Black Knight. A Fire Emblem GBA Pack featuring Eliwood, Hector and Guy would also work. So would a Sacred Stones Pack featuring Erika, Ephraim and Lyon or Seth. They could all work.

That aside, I am holding out hope we may see a Fire Emblem Warriors II. Would be cool and as I just hinted, there are ALOT of characters and games who could be drawn from to fill out the cast. Spanning all the current Fire Emblem games…we’re talking over 600 characters. So, yeah. If it happens, we’re talking a who’s who playable characters!