…You gotta give credit to The Pokemon Company: They shared enough info to market the game but not too much before its release. As it turned out, Ultra Sun/Moon followed the Yellow/Crystal/Emerald/Platinum model in which it’s an enhanced of the base pair.

There is a twist, however: Ultra Sun/Moon are the first games in which a new Pokemon is introduced that wasn’t in the base games: Poipole and its evolution form Naganadel as well as the Ultra Beasts Stakata (Ultra Moon Only) and Blacephalon (Ultra Sun Only).

The storyline involving Lusamine and the Aether Insitute is different as well. In Sun/Moon, she was the main antagonist. In Ultra Sun/Moon it’s Necrozma, The Ultra Beasts and in the postgame  Team Rainbow Rocket. More on them in a bit. Of course there’s also Team Skull but it’s a bit more obvious this time that they’re not really bad.

Mina, the Trial Captain of Poni Poni Island makes a brief cameo appearance in Sun/Moon and give you Fairinium Z. In Ultra/Sun Moon, she has a larger role and her own trial as well. Araquanid replaces Whishiwashi in the Water Trial and WILL curb-stomp your whole team unless you bring in an overleveled Pokemon to deal with it. Togedemaru replaces Vikavolt and despite the 4x Weakness to Ground will take some effort to take down quickly.

Like I said in my review of Sun/Moon, I hate Totem Battles and the SOS Mechanic as a whole. I hate the fact that Heart Scales are tied to it along with several Wild Pokemon obviously. For those who don’t know, Heart Scales drop from Luvdisc and is needed to use the Move Relearner since its introduction in the 3rd Gen. The thing is, wild Pokemon don’t always have a hold item with them. AlphaSapphire/OmegaRuby at least had a means of forcing encounters with wild Pokemon with a hold item. Since Luvdisc will only appear as an SOS Pokemon, that needlessly makes Heart Scales rare in the 7th Gen.

Rant over, moving on.

The games’ real big bad is of course, Team Rainbow Rocket. The 7th Gen’s introduction of other dimensions and multiple universes–and you can be sure this will be expanded upon–opens the door to bigger, longer and more games in the future. While it is true that there have been specific Pokemon whose lore involves other dimensions–most notably the Giratina and Palkia–Ultra Sun/Moon is the first game to take things to the next logical step and make a storyline focusing on it.

The Team Bosses from the previous gens all appear in the postgame Team Rainbow Rocket event. The tone is the same as OmegaRuby/AlphaSapphire’s Delta Episode. The cool thing about these bosses’ backstories: Each Team Boss comes from a “What if they succeeded?” world. Or more specifically, if the main protagonist wasn’t there to stop them. Colress from Black/White and Black 2/White 2, who makes a cameo appearance in Sun/Moon plays a significant role in the TRR Event. Each Team Boss has the cover legendary from their games. Cyrus has Dialga in Ultra Sun but Palkia in Ultra Moon. Lysandre has Xerneas in Ultra Sun but Yveltal in Ultra Moon. Ghestis has Zekrom in Ultra Sun but Reshiram in Ultra Moon. Finally, Giovanni’s Mewtwo will Mega Evolve into Mega Mewtwo X in Ultra Sun but Mega Mewtwo Y in Ultra Moon. This is the toughest string of battles yet and I strongly reccommend importing Level 100 Pokemon from Poke Bank or Sun/Moon if you can. 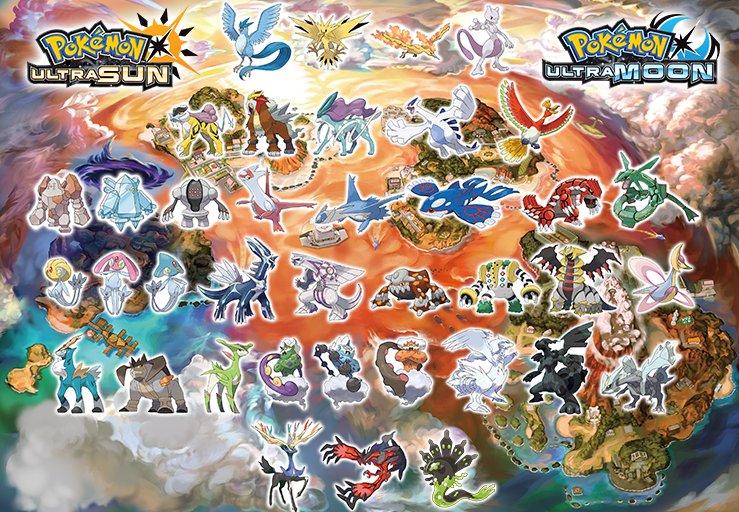 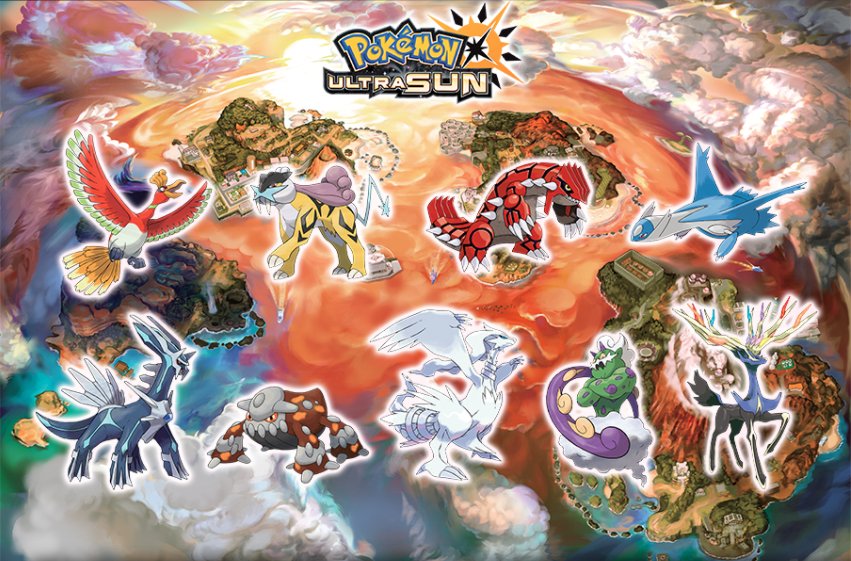 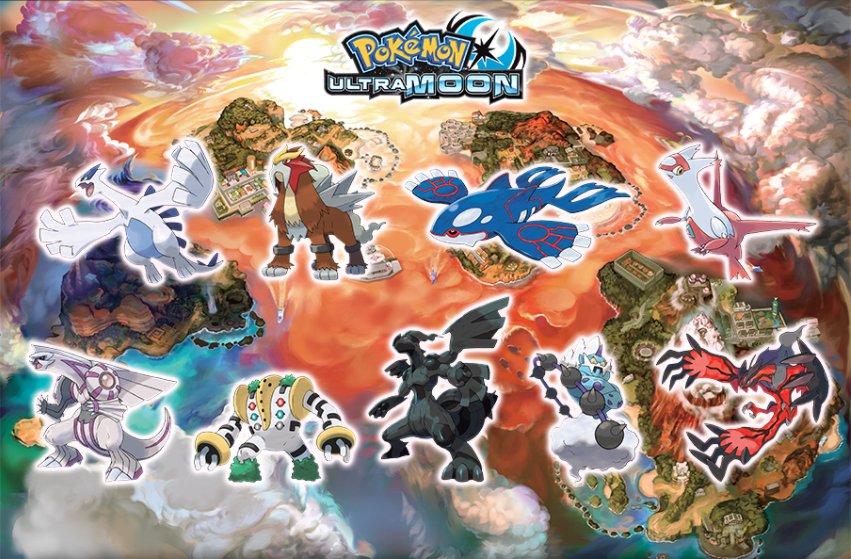 Like OmegaRuby/AlphaSapphire, you can catch ALL of them in Ultra Sun/Ultra Moon. The second and third pictures contain the version-exclusive ones. To get the third Pokemon, you will need to trade the Pokemon not in your game to yours and put both of them on your team (For example you need both Kyogre and Groudon to get Rayquayza).

As of the 6th Gen, the cover Legendary Pokemon are no longer the end-all powerhouses in battle they once were. I get they were nerfed to be fair to non-legends but prettymuch turning them into glass cannons? I shouldn’t have to worry about Groudon, Yveltal or Solgaleo being handled by a single Pokemon one on one. It should take the efforts of at least two Pokemon to take down ANY legendary Pokemon in my book. Mega Rayquayza will meet its match against Necrozma’s Ultra Form, Dusk Mane Solgaleo or Dawn Wing Lunala. For those who don’t know, Mega Rayquayza is considered the single most powerful Pokemon of the 6th Gen because of all the things it has going for it.

The nerf to Sandstorm, Snow Warning, Drizzle and Drought in the 5th Gen I get. For those who don’t know, Pokemon with one of those abilities would summon Sand/Storm, Rain or Sunlight for the rest of the battle. The moves were nerfed to only last for 5 turns with the exception of Primal Groudon/Kyogre (Sunlight/Rain lasts while said Pokemon is in the battle). Nerfing the weather mechanics was prettymuch necessary because of how integral the weather was for many in tournament strategies.

For a limited time, you could get a special Rockruff via Mystery Gift. This Rockruff has the Own Tempo ability (blocks Confusion) and comes with Happy Hour, a move exclusive to Ultra Sun/Move that works the same as the Amulet Coin (increases payout from Trainer Battles). It can also only evolved into a special Dusk Lycanroc 5:00PM and 5:59PM. For the other two Lycanroc forms, you will need to import them from Sun or Moon. The promotion ended on January 10, 2018 so the only way to get this special Rockruff is to ask someone who got one to breed one for you. 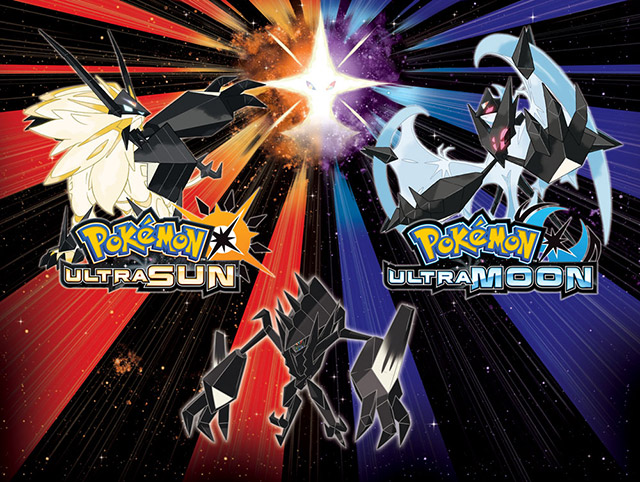 Z-Moves being usable once per battle makes using them very situational just like Mega Evolution. Speaking of, I was angered and furious how 95% of the known Mega Stones were locked behind the postgame Battle Tree no one dones. I refuse to participate in such a luck-based mechanic where the competition can 2 or 3-hit KO whatever you send out. Not just in Ultra Sun/Moon but Sun/Moon, too. I just wished they didn’t prettymuch add Mega Evolution as an afterthought in the 7th Gen. It felt like “Oh wait we forgot about Mega Evolution, which such a big part of the 6th Gen games!” It’s a travesty and felt like they were basically saying they regretted introducing Mega Evolution. That’s just one point.

The increased difficulty of the games is why I took two points off. It’s very…hostile to those new the Pokemon games or anyone who hasn’t played past the 2nd Gen to now. Even to Vets, you’ll be impatiently waiting for the chance to use the Pokemon you imported from Poke Bank but can’t since it’ll be a while before you have access to a Pokemon Center for the first time.

Speaking of Fire Emblem Warriors…yep, that review is coming up next ^_^