Would you pay $20 for a Playstation Classic console? 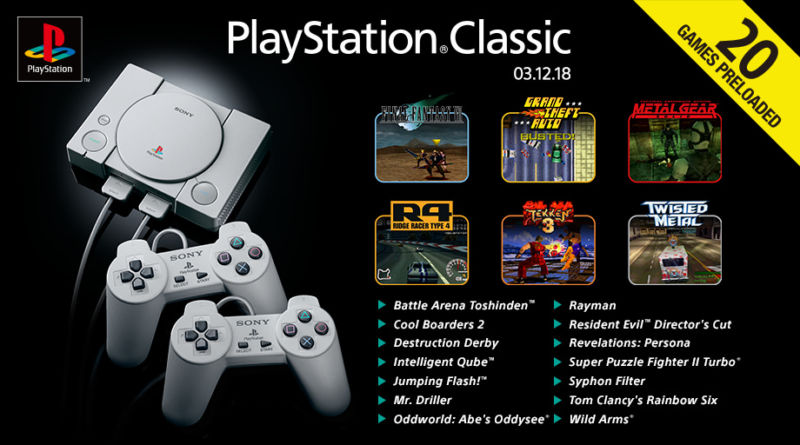 Here’s the full list of preloaded games for those who are probably looking it up right now or should be:

…I STILL own a physical copy of Final Fantasy VII and Metal Gear Solid even though I no longer have a PS1 console. Of course, I also have digital copies of both games (plus the Gamecube remake of MGS). $20 for 20 games is a steal. ONE of those two games is worth the money but both for $20 plus 18 other games? Madness to pass this up even if you’re a Nintendo or Microsoft fan.

In addition to the games, the console cames with an HDMI Cable and two wired controllers. The original PS1 used Wired Controllers and you didn’t see Wireless Controllers in the Playstation family until late in the Playstation 2’s lifespan (It was 100% Wireless from the PS3 onward). It also comes with a Virtual Memory Card, which basically means you don’t need a physical memory card to save your progress. For those with a PS3 or Vita who may be looking to buy and download all of these games, you will need at least $200 which is more than the original price of $100.

The PS Classic is a sample of the best of Sony’s first Playstation console.

One can’t help but note a few significant omissions I would’ve liked to have seen included:

…LOL I realized after the fact this is anorher list of 20 games!

Such a deep history from just those two titles!

Gran Tourismo, Tomb Raider and Crash Bandicoot are three HUGE omissions but I do think they were left off to keep the price down. I don’t think the PS Classic would be $20 right now if those three games were included. If you wanna play any of the games on my wish list you can but you will need a PS3 or a Vita since they are all digital on the Playstation Network. FF1, FFII, FFIII (the real FFIII), IV (as well as its sequel, The After Years), V and VI can all be bought from the Playstation network separately via the PSN.

Oh and yeah I do think Sony considered their attempt to get in on the Mini Retro Console bandwagon may be a failure. I think it’s salvagable and more so if Sony decides to make a PS2 Classic and PSP Classic respectively.