…I feel like it’s more than fair for me to now say the naysayers were justified in their scathing criticism of the newest entires in the MAINLINE Pokemon games when they were first announced almost 8 months ago. You can find out the specifics if you simply go to Serebii.net, which has begun covering the games in detail as of November 14.

Game Freak struggled to publicly defend the controversal decision to not include all Pokemon from the National Pokedex since the bombshell announcement, which now stands at 890 (80 new Pokemon). I don’t just mean they’re not natively available like Gens 3 through 7. I mean the data for them is not in Sword and Shield. So, you CAN’T transfer them into the game. Serebii.net notes just over 450 Pokemon including all of the second (Johto), third (Hoenn), fifth (Unova), sixth (Kalos) and seventh (Alola) Gen Pokemon are omitted. Most of the Pokemon that ARE in the Pokedex for Sword and Shield–400 Pokemon–are actually older Pokemon. Only 80 new Pokemon are introduced so yes, the other 320 Pokemon are Pokemon from past games.

…That actually wasn’t the deal breaker for me though I now do agree with one comment I read on Facebook where one person basically said Nintendo is charging $60 for less compared to the older games. Game Freak owned it and admitted the real reason they cut half the National Pokedex from Sword and Shield is so they could focus more time and attention on the Dynamax and Gigantamax mechanics, which are unique to the new games.

26 Pokemon have Gigantamax forms on that note. Yes, only 26 out of 400 Pokemon. Over 450 Pokemon were excluded so just 26 Pokemon could have a Gigantamax form. This wasn’t even considered for Mega Evolution in the 6th Gen games. In the Alola Games, ALL Pokemon could use Z-Moves–the trademark mechanic for those games–in comparison. As a reminder, you’re paying $20 MORE for LESS (The Alola games were $40 when they were released) overall. While no new Mega Evolutions were introduced in Alola, the games DID support Mega Evolution after you beat the Elite Four. Both Mega Evolution and Z-Moves are left out of Sword and Shield which I don’t have a problem with personally.

The deal breaker for me was the revelation that almost 40 Pokemon moves (excluding Z-Moves on that note) were also cut. If you transfer in a Pokemon that knows say, Mirror Move or Sky Uppercut you will be promoted to delete the move. That’s a HELL NO from me on getting this game because of that. I was willing to overlook paying $20 more knowing over 400 Pokemon are not programmed into the game. Knowing I will be forced to delete moves if the 320 Pokemon from past games have it is a hard pass on these games from me. It now makes sense why the games’ Move Relearner–that’s a guy who will teach all Pokemon moves it once knew–doesn’t charge anything this time.

Still, this makes Sword and Shield a hard pass for me. I was willing to overlook the price increase and Pokemon omissions but not the forced move deletions from imported Pokemon. No wonder Game Freak didn’t want to say too much about what will be omitted. I forgot to also say since the Ice Rock, Moss Rock and Magnetic Areas aren’t in the Galar Region, you evolve Eevee, Charjabug and Galarian Darumaka with the Leaf Stone, Ice Stone and Thunder Stone (Magneton and Nosepass aren’t in the games on that note). That just SCREAMS “cut corners to rush the release of the games” to me personally. Clearly many longtime Pokemon fans felt the same since the games were first announced.

I’ll give props where it’s due to Game Freak for knowing these changes would piss off a lot of people enough to not want anything more to do with the Pokemon games and still having the balls to follow through. Reportedly, many developers were against the call omit over 450 Pokemon. Further, Game Freak said moving forward omitting most Pokemon from the games will be its new policy. All to roll out games faster. They got this one wrong at the end of the day. Folks would’ve happily waited 6 to 12 more months if it meant ALL Pokemon could be used.

The last time there was a Pokedex-related firestorm like this was when the third Gen Pokemon games Ruby and Sapphire were introduced back in 2003 for the Game Boy Advance. Unlike the first two Gens, you couldn’t trade between the third Gen and first two Gens. You were starting fresh in short. Nintendo revealed when their remakes on the 3DS were released the reason was technical. They said if Cloud Storage existed back then, they would have gone that route to allow people to transfer Pokemon to the third Gen Games.

Nintendo would later address the problem in the third Gen with the release of Pokemon FireRed and Pokemon LeafGreen, which were released to coincide with the 10th Anniversary of the release of the original Pokemon Red and Blue (Green in Japan). Pokemon Coliseum for the Gamecube allowed players to catch Pokemon from the Johto Region and thus complete the National Dex. Nintendo made sure players could transfer older Pokemon to the next Gen without too much difficulty from the 4th Gen on via the Pal Park (4th Gen), Migration (5th Gen), Poke Transporter App (6th Gen and virtual console). 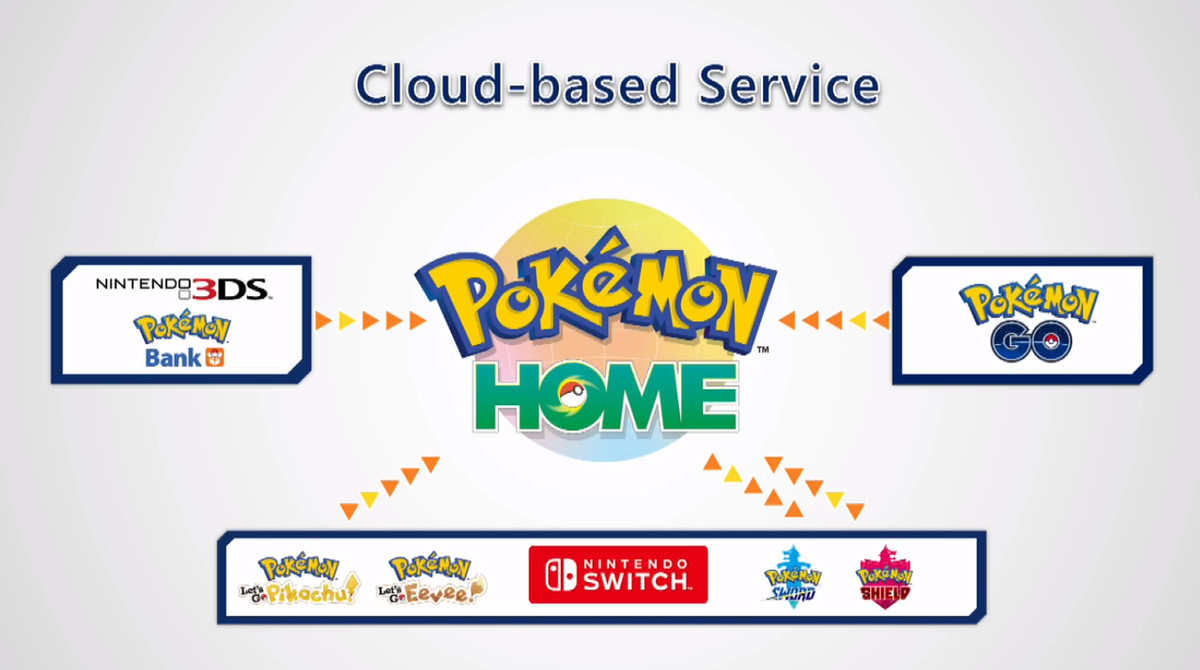 As of right now, I have no reason to get the Pokemon Home App.

It will be subscription-based like Pokemon Bank on the Nintendo 3DS is but will be the new central place for Pokemon Mass Storage for ALL the Pokemon games past, present and future. Pokemon Bank allows one to store 3,000 Pokemon from the 5th, 6th and 7th Gen games as well as the Virtual Console versions of the 1st and 2nd Gen games via the Poke Transporter App. Pokemon in the Virtual Console games can be moved by placing them in the 1st Box of the PC but as a reminder, the transfer is 1-way. Also, Pokemon transferred from the Second Gen can only be sent to the 7th Gen games from Pokemon Bank. Pokemon transferred from the first Gen can be sent to the 6th or 7th Gen games.

This post went on for much longer than I planned but I’ve said my piece. I’m still getting a Switch eventually (once I have the means) but I’m definitely not getting Sword or Shield. That’s how you show a company you don’t like something. With your wallet.